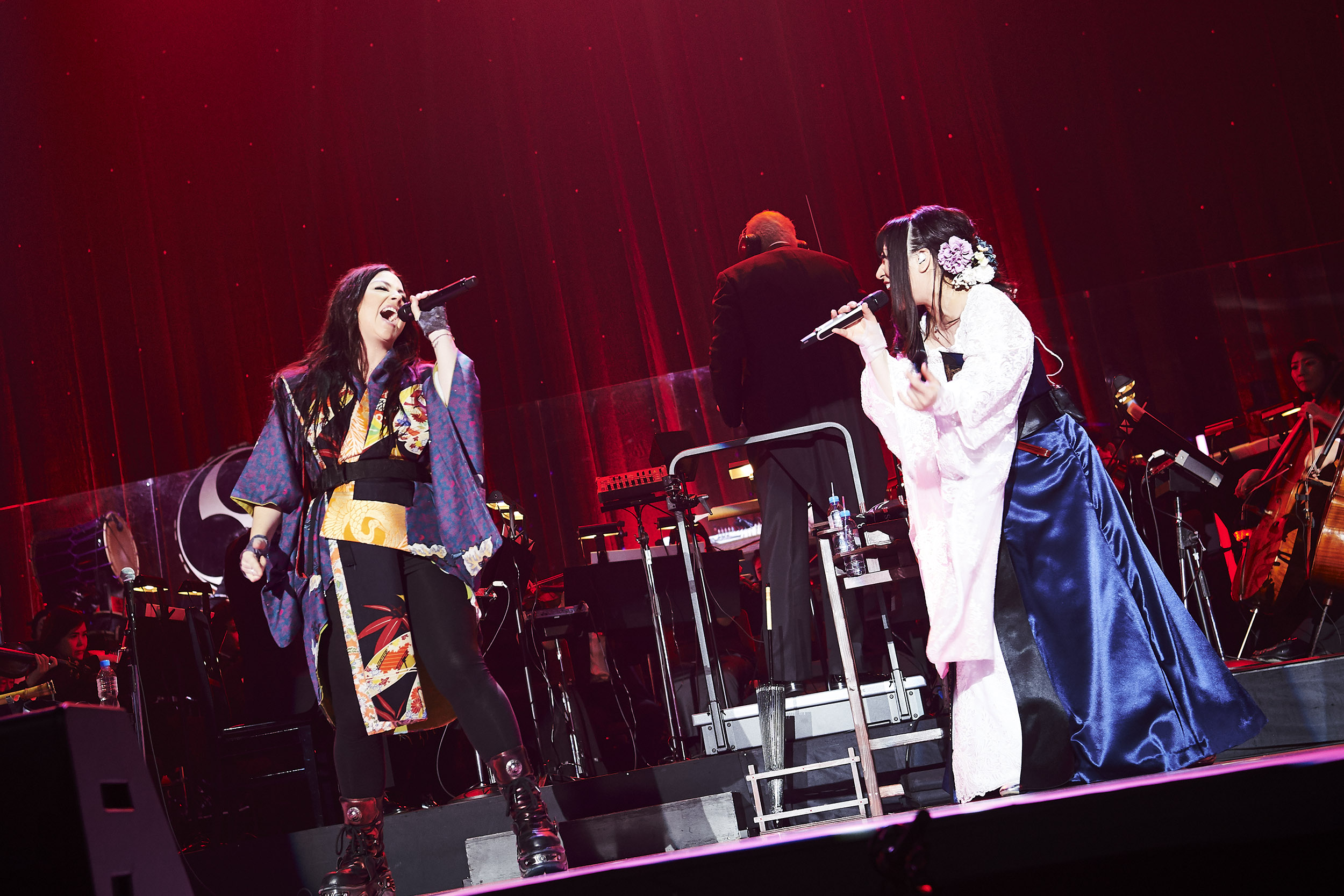 WagakkiBand held an exclusive concert on Sunday, February 16th at the Osaka-Jo Hall titled “Premium Symphonic Night Vol.2 Live & Orchestra in Osaka-Jo Hall 2020” where they performed with a full live orchestra.  This was their first headlining show of 2020 and their second time to perform with The WGB Premium Symphonic Orchestra after their first collaboration in February 2018 at the same venue.   The band performed 16 songs altogether including a special collaboration with Amy Lee, lead singer of the two-time GRAMMY Award-winning rock band, Evanescence.

“It so happens she took interest in us after watching the video of our previous ‘Premium Symphonic Night’ and graciously said that she wanted to meet us.  She’s really excited about performing tonight,” and together they delivered a superb rendition of Evernescence’s ‘Bring Me To Life’.  Amy’s powerful and emotional vocals were met with Suzuhana’s gorgeous harmony with Machiya contributing on the rap vocal parts.  Along with the other members of WagakkiBand and The WGB Premium Symphonic Orchestra they brought the house down with a dramatic East-meets-West performance.

After Amy left the stage, the band performed their last song of the night, ‘Senbonzakura (A thousand cherry blossom trees)’.  The band members moved around the stage engaging the audience creating a festive vibe.  As if that wasn’t enough, close to the end of the song Amy came back onto the stage and surprised the audience by joining the performance singing in Japanese perfectly in harmony with Suzuhara.

This was the first time for her to sing a song in Japanese.  Thus, the main portion of the show came to a climactic end.

Even after the performers left the stage, we were in for another surprise.

An announcement was made that WagakkiBand will be performing another exclusive concert called “Festival Nara” on March 28th at the Suzaku Gate Square of the Heijo Palace (former site of the ancient Nara Imperial Palace), a part of the UNESCO World Heritage Sites of Nara.  With a memorable global collaboration with Amy Lee under their belt and an upcoming concert at a World Heritage Site, WagakkiBand continues to exceed our expectations with their groundbreaking music and exciting performance.

The band was integral in establishing a global, critical mass for women in rock. The group’s 2003 landmark debut album Fallen laid the foundation; spending 43 weeks on the Billboard Top 10 selling more than 17 million copies worldwide. Debut single and global hit “Bring Me to Life,” reached #5 on the Billboard Hot 100 as well as marking their first U.K. #1 hit single. The equally popular “My Immortal” peaked at #7 in the U.S. and U.K. The album produced four singles total including “Going Under” (#5 U.S. Modern Rock, #8 U.K.) and “Everybody’s Fool” (#36 U.S. Modern Rock, #23 U.K.).

Following multiple worldwide tours, The Open Door came next, which went on to sell more than five million copies followed by the self-titled Evanescence which debuted at No1 in the Billboard Charts.  EVANESCENCE–lead singer-songwriter and pianist AMY LEE, bassist TIM MCCORD, drummer WILL HUNT, lead guitarist TROY MCLAWHORN and guitarist JEN MAJURA—went down both very new and familiar paths for their fourth and most ambitious release to date, SYNTHESIS in 2017 via RCA. EVANESCENCE launched their worldwide “Synthesis Live” tour in October 2017 combining their intense live performances and timeless songwriting with a powerful live orchestra.   Following an appearance at Download Japan on March 29, Evanescence will embark on a month-long tour of European arenas in April with co-headliner Within Temptation.

Their 2nd album [八奏絵巻] that was released on 2015 has won 1st position in Oricon Newcomer Weekly Ranking, and won the 57th award from [Kagayaku!Nihon Record Taisho Kikakusho].

Well known as an energetic performing band in Japanese and abroad, in 2016 was their 1st concert in Nihon Budokan, 1 year 9 month after their 1st debut. They also did their North America Solo Tour, as one of their goal for becoming worldwide well known band.

In 2019, they has succeeded performing 2 days live concert at Saitama Super Arena. They are one of the most highlighted band in Japan currently.