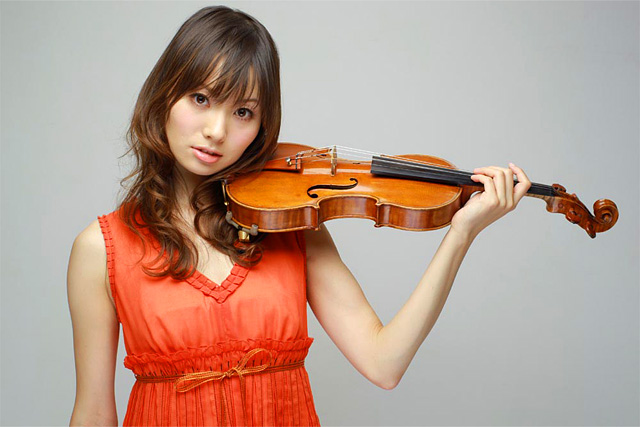 Honoka (Honoka Sato), born October 26, 1983 in Tokyo, Japan, is ajapanese singer-songwriter and violinist. She made her major debut on the Sony Music Japan label with the album “Wedding Kiss” in 2010.
Profile:
Name: Sato Honoka
Birthday: October 26, 1983
Birthplace: Tokyo, Japan
Blood Type: O
Instruments: Violin, piano
Influences: G-clef, KRYZLER & KOMPANY, Akeboshi
Education: Kunitachi College of Music
Honoka began playing violin at the age of 3 and piano at 4. During middle school, she was a member of a classical band. She later studied under violinist Hori Masafumi and graduated from the Kunitachi College of Music majoring in violin. Since then, she has participated as a support violinist for different artists. In 2004 and 2005, she recorded songs as part of Nippon Crown’s compilation albums AOSORA ~Doko Made mo Fukai Aoi Sora~ and AOSORA ~FOR SEASON~.
In June 2005, Sato formed the duo alüto with Fujita Daigo. Apart from the band, she has performed instrumental theme songs for different media, including J-WAVE’s BOOM TOWN “Blendy HEART STRINGS” corner and Nippon Broadcasting Network’s radio drama Hikuushitachi no Tsuioku. In March 2010, she undertook her first role as an MC on the television show Ongaku no DNA. The following June, Sato released her debut solo album, Wedding Kiss, under the mononym Honoka.
Official Website: http://www.honoka-sugar.com/index.html
SMA Official Website: http://www.sma.co.jp/artist/profile/index/51
Blog: http://ameblo.jp/honokasugar/
Twitter: http://twitter.com/honokasugar