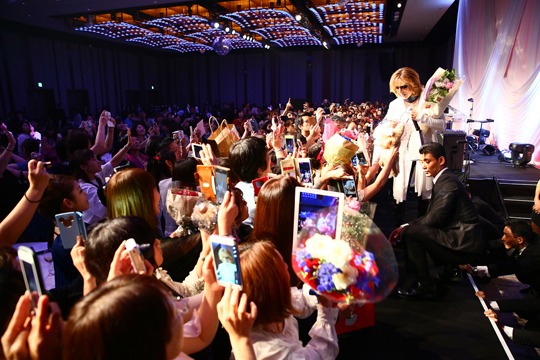 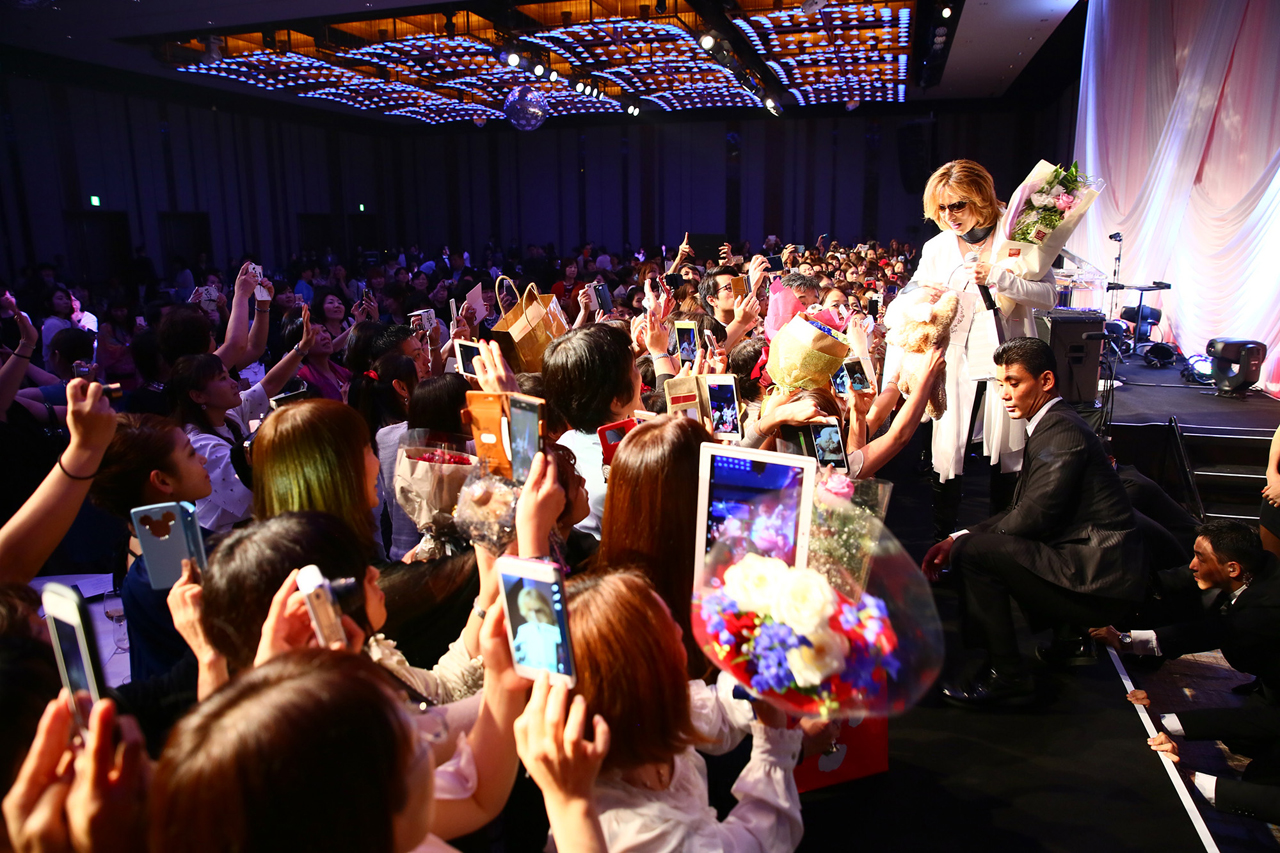 On Saturday, September 2nd, “EVENING WITH YOSHIKI 2017 IN NAGOYA & OSAKA & TOKYO JAPAN” ushered in its final day at the Grand Hyatt Tokyo. The sold-out tour, which began with a first-ever set in Nagoya, moved on to Osaka and Tokyo for a total of 7 shows, including the addition of a last-minute breakfast show to meet the overwhelming demand to witness a rare, intimate YOSHIKI performance. The Grand Hyatt Tokyo Ballroom — having undergone 2 months of extensive renovations — was unveiled for the first time for the YOSHIKI dinner show,where 2,400 pendant LED lights (a first-ever arrangement for a hotel in Japan) glittered brilliantly.

Guests were greeted by the sight of an illuminated drum set and a crystal piano. At the entrance to the venue were two enormous panels, displaying an image of YOSHIKI performing at a piano and a towering reproduction of YOSHIKI’s cover image of Vogue Japan, which went on sale August 28th and garnered enormous media attention for being the first time a Japanese male has ever graced the magazine’s cover. The tables were set with a beautiful, finely prepared dinner menu created under YOSHIKI’s personal supervision, and guests were treated to YOSHIKI’s original wine, several original souvenirs specially prepared for the event, and limited edition dinner show merchandise.

Also present at the ornately-decorated venue were a number of international and cultural celebrities, including Japanese actress Kaori Momoi, former U.S. and U.K. ambassadors, and representatives from the talent industry and American talent agencies. Several VIP guests from all walks of life attended as well, such as Professor Shinya Yamanaka (Director of the Center for iPS Cell Research and Application at Kyoto University) and sumo wrestler Hakuho, a testament to YOSHIKI’s ability to bridge countries and cultures, culminating in a performance that reflected his broad international appeal.

The concert began with “THE LAST SONG,” which was performed as the final song of X JAPAN’s last concert in 1997. Other famous songs representing the X JAPAN era included “Forever Love, ” Without You,” and the theme song from the documentary film WE ARE X (scheduled for its long-awaited release on Blu-ray and DVD in Japan on December 13). In addition, epic-scale songs crafted by YOSHIKI, such as the theme song to the 69th Golden Globe Awards show, “I’ll Be Your Love” (the official image song for The 2005 World Expo), and “Anniversary” (composed in honor of the tenth anniversary of Emperor Akihito’s enthronement), were accompanied by strings and guest vocalists Ashley Knight and Katie Fitzgerald. During the request segment of the show, he performed songs such as “Silent Jealousy” and “X”. The finale was “ENDLESS RAIN”, played to a rousing chorus amidst the glittering, beautiful light of mirror balls. With a total of 15 songs, the final concert completed the tour in grand style.

In addition, the night included several unforgettable moments, such as a fashion show with models dressed in splendid YOSHIKIMONOs, an appearance by Yoshikitty, and various surprises (such as YOSHIKI suddenly appearing at the tables to greet his audience) that would fill the hall with screams of delight.

The highlight of these dinner shows was the close communication between the performer and his fans made possible by the intimacy of the venue. As YOSHIKI himself remarked during his MC segments, seeing his audience from so close was a rare and new experience for him as well.

This year’s charity auction featured a total of 26 items from all 7 dinner shows (including 5 items from this final performance), earning a total of ¥41.59 million in bids. This year’s offerings featured personal items and outfits worn in photo shoots. With the news of flooding in the state of Texas caused by the recent hurricane, YOSHIKI expressed his desire to donate proceeds from this auction to the rescue and rebuilding efforts. The money raised from this event will go to the U.S. 501(c)(3) non-profit foundation “YOSHIKI FOUNDATION AMERICA”, which he continues to operate in an effort to fulfill a wide range of services.

Still suffering from pain caused by his surgeries, YOSHIKI was accompanied at this year’s dinner shows by a doctor at each stop, with the utmost care being given to his physical health. Even through his discomfort, however, YOSHIKI endeavors to push forward, saying, “There are walls which need to be broken.” Immediately after completing “EVENING WITH YOSHIKI 2017,” he is scheduled to fly to Europe for a WE ARE X promotional tour. With no time to rest, his days of traveling around the world are about to begin again.

Remarking that, “Life should be about how many wonderful memories you can impress into your soul,” YOSHIKI completed this 7-concert tour with the hopes that these dinner shows would provide lasting memories for all of his fans.