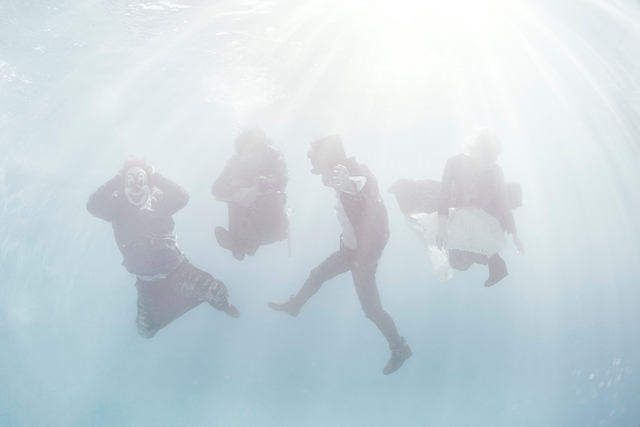 SEKAI NO OWARI is currently one of Japan’s most popular and skilled creative groups.
The group is comprised of four distinctly talented members: Nakajin (group leader, lead guitar, sound production); Fukase (lead vocals, group conceptualist); Saori (stage production, piano); and the masked clown DJ LOVE (sonic palette, comedic stage banter).
These four childhood friends grew even closer while collectively managing the live music venue clubEARTH, which they built from the ground up. The members were living on the premises as they developed the concept and direction of what would eventually become SEKAI NO OWARI.
Now their combined passion and deep personal connections have led to unprecedented success as one of Japan’s premier music acts, culminating with their latest album, Tree, (January 2015) charting at #1 on the hit charts.
And in July of 2015 they performed two sold out shows at Japan’s largest venue, Nissan Stadium. Roughly the size of London’s Olympic Stadium, Nissan Stadium seats 70,000 people and both shows sold out in a matter of hours.
The group’s originality and creativity known as “TOKYO FANTASY” are highlighted by their massive fantasy stage setup, a high-concept, reality-redefining magic treehouse and exotic town known as “TOKYO FANTASY”. Such fearlessness in stage design and entertainment value has become the envy of the Japanese music industry.
SEKAI NO OWARI have performed all over Japan, including a 9 city, 15 performance arena tour that brought in more than 200,000 fans, and have sold out the legendary Budokan (of Beatles fame). With multiple commercial tie-ins, features in TV and movies, they have conquered the Japanese music scene.
And now, after years of preparation, SEKAI NO OWARI is ready to take their originality and imaginative shows to music fans all over the world.
In 2014 the group collaborated with the popular American act OWLCITY, inviting him as a special guest for a major live event. In return the American featured SEKAI NO OWARI in his worldwide release “TOKYO”.
Additionally, the group worked with renowned Dutch DJ / Producer Nicky Romero on the release of their hit single “Dragon Night”.
Their success is also evident on YouTube, as their massive 2013 hit “RPG”, has reached more than 100 million views on the social video site.
SEKAI NO OWARI also performed the official theme song for the movie “Attack on Titan”, based on the world famous comic book.
With their foot already in the international music scene SEKAI NO OWARI became the very first Japanese artist to join the MTV World Stage in Malaysia this year, along with a stellar lineup including Jason Derulo and Carly Rae Jepsen, among others.
Their inimitable talent and ability to appeal to a wide range of listeners has put them at the top of Japan’s current generation of artists. With their recent collaborations and multi-media projects the group is quickly spreading their brand around the globe. This is only the beginning for SEKAI NO OWARI; a whole new world awaits.
Official Website: http://sekainoowari.jp/en
Twitter: http://twitter.com/fromsekaowa
Facebook: http://www.facebook.com/OfficialPageSEKAINOOWARI