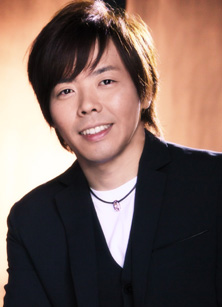 Went to Tokyo from Takamatsu city of Kagawa prefecture in pursuit for a career as a singer at the age of 16 and found employment at a music production company.
Worked as a manager for singers while studying music.
After being recommended by an acquaintance who was fond of his personality, starred in the Fuji TV impersonating competition show “Nihon Monomane Taisho”, and won an award by impersonating “George Yamamoto”.
After that success, Kurita continued his career as an impersonator until his current company scouted him, where he took up studying music again. He made his long sought-after CD debut in 2009.
In 2011, Kurita’s success in “Chaku Uta” (Cell phone ringtone) lead to the release of his second single, “Senba Zuru”.
Blog: http://blog.goo.ne.jp/deco55deco99-9
Blog: http://ameblo.jp/kurita-kenji/
Tokuma Japan Communications: http://c.tkma.co.jp/tjc/enka/kurita/index.html