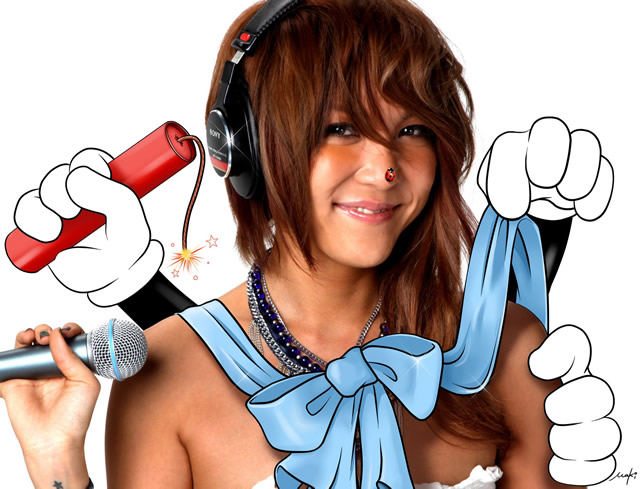 Emi Hinouchi is a Japanese urban music singer-songwriter. She is signed under Taku Takahashi’s Tachytelic Records. She has written many songs for Heartsdales, and has sung back up for those songs. Hinouchi is probably best known for her collaborations with m-flo.
Emi Hinouchi was born in Osaka. She spent her childhood in Taiwan from the age of 4 to 14 . Hinouchi grew an interest in global and Japanese music. After returning to Japan, she started making music and writing lyrics and completed “Painful” at the age of 16.
After that, she performed a lot of gigs as a vocalist with an indie band from Osaka. She presented the song “Painful” at an audition held by Taku Takahashi (from m-flo), who she was always a big fan of, and she won. She debuted with the single “Magic” (with the B-side “World”). Her first album “Dramatiques” was released in 2003.
As of 2006, Emi has released 4 singles and one album. These days, she has been collaborating with m-flo, SOUL’d OUT, Crystal Kay, Heartsdales and Teriyaki Boyz. Also, Emi has been writing songs and providing backup vocals for m-flo. Emi has written lyrics for m-flo such as: “Luvotomy”, “Simple & Lovely”, “STUCK IN YOUR LOVE”, “LOTTA LOVE” and “Love Don’t Cry”. She also recently collaborated with m-flo and Ryohei for a new single “Summer Time Love,” and with Korean hip-hip group Epik High for the song “Flow”, and has also recently collaborated with the entire m-flo loves family (a.k.a. Yoshika, Emyli, LISA & Ryohei) on the song “Love Comes And Goes” for m-flo’s new “best of” album titled “Award Supernova: Loves Best”.
Moreover, she sings a CM song (“O’kay”) for Karin Chaim’s Holyoke’s Pineapple Cooler. At the moment she’s focusing on recording new music, writing new lyrics for the m-flo loves family and collaborating with other hot artists
Official Website: http://hinouchiemi.com/
Facebook: http://ja-jp.facebook.com/people/Emi-Hinouchi/100001623426852
Blog: http://ameblo.jp/hinouchiemi/
Twitter: http://twitter.com/hinouchiemi
Myspace: http://www.myspace.com/emihinouchi