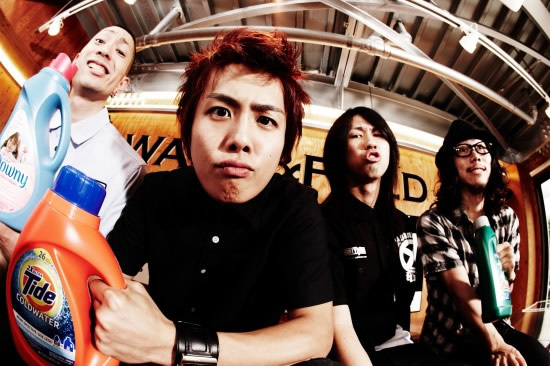 An exciting newcomer to the Indies scene, GLORY HILL, is a melodic punk emo band.
In 2006, their Indies pre-debut album “proof of existence” became a smash hit through word of mouth, when people heard them at the listening booths at record stores.
In June 2007, their 10,000 press limited Indies 1st single “Everything e.p.” hit 2nd place on the Indies Weekly Chart. The single sold out within 3 days of its release, which led people to buy and sell the CD at premium values on Internet auction sites. Carrying that momentum behind their backs, they released their 1st Indies album “LOST GENERATION” which was awaited with high hopes by fans. The album reached 2nd place on the Oricon Indies Weekly chart on the first week of the release, which led them to become an overnight sensation.
Tickets for their national tour after that were sold out for many venues, and as a result, many fans were seen at the site, looking to get tickets.
In March 2008, released their 2nd Indies single. In promotion of that release, they toured over 25 locations nationally, which included several one-man shows. Many expect them to reach higher grounds in the near future.
Official Website: http://gloryhill.jp/
Myspace: http://www.myspace.com/gloryhilljp
Blog: http://official.blog-gloryhill.jp/