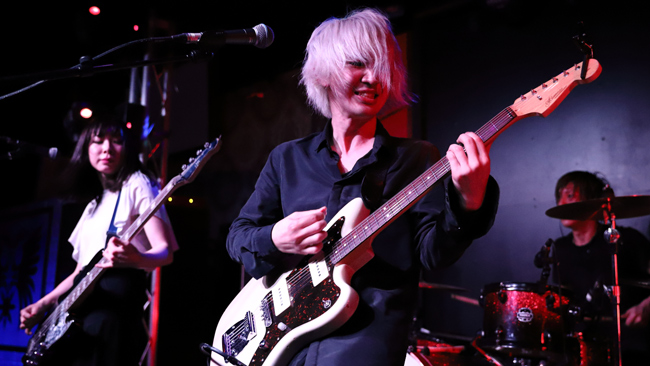 sokoninaru at The Lounge, London

The alt-rock outfit sokoninaru have built themselves a decent following since their formation in Osaka in 2011. They’ve attracted some international attention too with their Tenohira de Odoru music video, which has racked up an impressive one and a half million views, but they’re still not that widely known outside of Japan. Aside from a 2015 appearance in Taiwan, The Japanese Riff Explosion tour is their first major international adventure and it’s a brave move to head out on a six-country, 14-date European road trip, given their current profile and the marginal finances for an independent label band touring overseas.

The venue for the band’s UK show is The Lounge in Camden – what you might call an intimate setting. The Lounge’s stage, if it’s worth the name at all, is a small platform raised about six inches. It has barely enough space for the drums and amps and certainly no room for anything else, particularly guitarist Juko Suzuki’s enormous effects pedal board. The stage doesn’t even have a backstage. The band members emerge from a door behind the venue’s bar and make their way through the waiting audience to take up their instruments. Guitarist Juko Suzuki, dressed all in black and eyes hidden behind his bleached grey hair, is joined by Misaki Fujiwara. Her smart, yet feminine, white blouse and black skirt may not look very rock ‘n’ roll but make no mistake; she’s serious business with that bass once the show gets going.