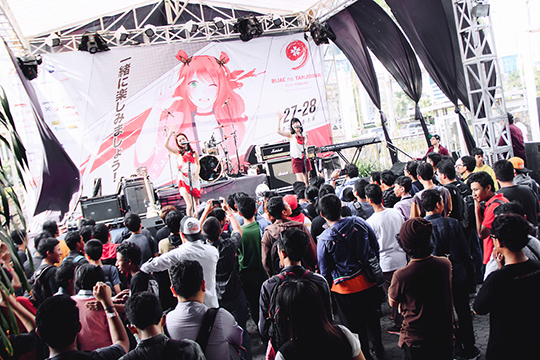 Faint★Star has made their fifth trip to Indonesia from February 25 to 29. They performed live at the “Japan Wave Expo 2016”, a music and fashion event attracting nearly 40 thousand people in two days, and at the Binus International University festival. Their show was a great success.

In Indonesia, Faint★Star is known as the “campus festival queen.” Last year, they performed at Utama University and Padjadjaran University (in May and October), as well as Gadjah Mada University. Receiving offers from more than ten schools, they have become very popular in Indonesia.

At the Binus International University festival, “Bijaknotanjoiwai,” they also participated as judging panels of the karaoke contest and performed in the main event of the festival, often using the Bahasa Indonesia language, the official language of the country.

They also proposed the toast at the reception party and performed in collaboration with a group of fashion models. On the 27th, they appeared on stage featuring a local girl band “Teenbelle” and many were drawn into their show.