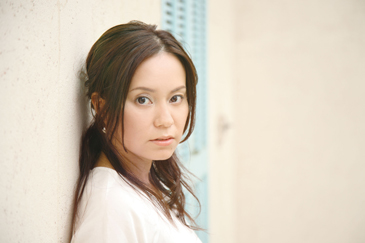 Narisoko Yuko was born on December 11th in Miyara Ishigaki Island Okinawa Prefecture.
Since her childhood, she has been exposed to Okinawa folklore, influenced by her relative who is a folklore singer.
Also her father, who is a fan of classical music, inspired her to take piano lessons, and join local choir when she was in the third grade. In her sophomore and senior year of her high school, she won gold medal for years in a row at National Music Competition Classical Singing Category. She enrolled in Musashino Music University and moved to Tokyo.
After graduation, she stayed as a grad student and studied in Italy as a member of Opera Theater. After returning to Japan, she started writing songs and lyrics, and performing at music venues. She was featured in the theme song of Hisaya Morishige’s last DVD “Shimo Yo Danuki”, praised by him as “ The miraculous diva for the next generation”. In 2009, her song “Furusato Karano Koe” was featured on “Daremo Shiranai Nakeru Uta” on Nippon TV, which created a buzz by the viewers. In November 2010, she made her major label debut with that song.
Official Website: http://narisokoyuko.com/
YouTube: https://www.youtube.com/c/narisoko
Facebook: https://fb.com/458873450869527
Label Site: http://www.kingrecords.co.jp/cs/artist/artist.aspx?artist=40060
Album “Narishika” was dropped February 3rd 2016.