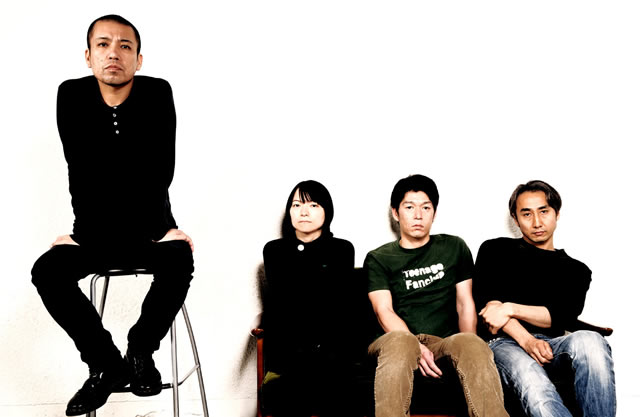 bloodthirsty butchers consists of Hideki Yoshimura (Vo & G), Takeshi Imoriya (B), and Masahiro Komatsu (Dr.) began their career in Sapporo, Hokkaido in 1987.
Their sounds create a miraculous world of their own and impress people deeply. They have formed friendship with BECK, FUGAZI etc., and RAGE AGAINST THE MACHINE asked them to play together when they had a Japan tour in the summer of 2000.
They have released 9 albums and 7 singles up to now. They play together with many overseas musicians and play a lot in the domestic events including big summer music festivals such as FUJI ROCK FESTIVAL, RISING SUN ROCK FESTIVAL and so on.
Welcoming Hisako Tabuchi (G.) in 2003, they released the first album 『birdy』 in 2004 as the “reformed” bloodthirsty butchers. In September 2004, they had their own event and played together with the evens, which consists of Ian MacKaye and Amy Farina and released the original album 『banging the drum』 in 2005 and also 『bloodthirsty butchers VS＋/－{PLUS/MINUS} 』with +/－ {PLUS/MINUS} from New York.
They started their own label 【391tone】 in 2007 and released 『Gitarisuto wo korosanaide』.
Using Yoshitomo Nara’s artwork for the cover jackets of three albums released from 2005 to 2007 became a hot topic.
They started to perform in Asian countries such as Taiwan at about this point.
In March 2010, they released a long-awaited new album 『NO ALBUM MUDAI』 and 『kocorono completed』 that is the complete version of the renowned masterpiece 『kokorono』, which they released 13 years ago but is still selling well.
Furthermore, their documentary film is now in the production and will be screened in 2010.
Official Website: http://www.bloodthirsty-butchers.com/
Myspace: http://www.myspace.com/bloodthirstybutchers