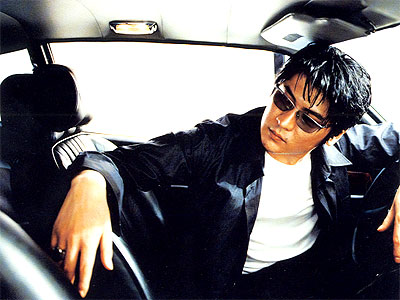 Kōji Kikkawa ( born August 18, 1965 in Hiroshima) is a Japanese musician.
His music career began on February 1, 1984 with “Monica” (later remade in Cantonese sung by Leslie Cheung) and he won 8 music awards in the same year. After taking a short break in 1988, he came back as a lead singer in the band Complex with Tomoyasu Hotei (former guitarist of BOOWY) and “Be My Baby” was released. Complex remained as one of the most popular bands in Japan until 1990.
After “Complex”, Koji released series of hit singles such as “Setsunasa O Korosenai”, “Kiss Ni Utarete Nemuritai” and “Boy’s Life”. Koji completed a “20th Anniversary Tour” at Budokan on February 1, 2005.
His latest single is “One World,” and is the theme for the 2006 motion picture “Kamen Rider Kabuto: God Speed Love.” More recently, he had teamed up with popular Japanese DJ TWINS to release a single “Juicy Jungle”. Also, DJ TWINS had released an album with remixes of several of Koji’s previous hits.
With this new sound-disco revisit, Koji redefined himself like he does year after year. Throughout all his career, it could be considered that Koji had outgrown from an idol to an artiste that explore the music boundary. He writes his own songs, produced and arranged his own albums and also played most of the instruments in it.
His albums are always different through experimenting and reinventing. It is considered without doubt that rock is his form of sound and genre. He is an icon in his own rights-be it in fashion or music. Until now, he is renowned for his live concerts-where he sounds better live-due to his dynamic showmanship & stamina.
He had just released a remix album of his old hits-titled-DISCO K2. In April 2007, a new single “BABY JANE” was released.
Official Website: http://www.kikkawa.com/
UNIVERSAL MUSIC: http://www.universal-music.co.jp/kk/
Twitter: http://twitter.com/k2stream_staff