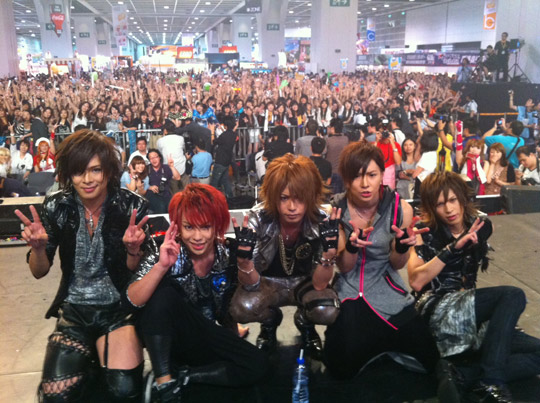 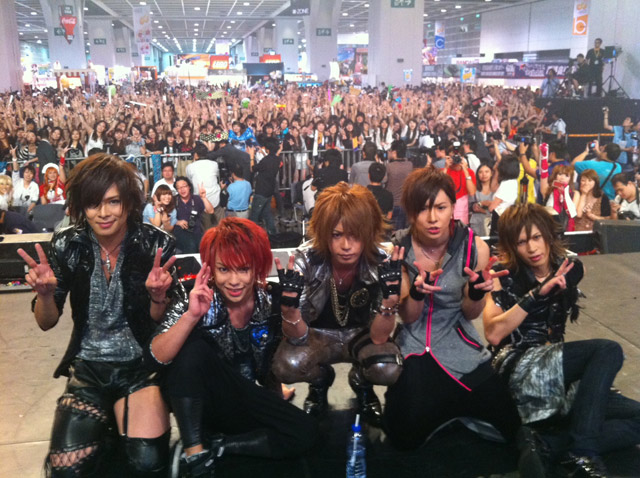 Popular rock band ViViD joined ACGHK, which is a event meaning Anime, Comic, Game, Hong Kong, and performed in front of 10,000 audience on Aug.2.
This event draws approx. 650,000 people in 5 days, and ViViD performed on the final day as “main act” . Thanks to his popularity, unprecedented 10,000 fans gathered the venue.
Regardless of their 1st visit to HK, local fan base has already been created. They performed for 40 minutes inserting MC by Cantonese, the local language in between.
After the performance, the band took a memorial photo with audience, but not all the fans couldn’t be shown on it because of so many people lined up.
Before major debut, the band already performed at France (Japan Expo) and Thailand.
In respond to thus following wind from Asian market, ViViD will make Asia tour this November including Taiwan, Hong Kong, and Singapore.
Nihon Budokan concert is already fixed at Jan. 7, 2012.
■ ViViD official site
http://www.pscompany.co.jp/vivid/index.html
ViViD ASIA LIVE 2011 「Take-off」 in Hong Kong
■Show date：Nov.5 (Sat)
Starts: 20:00
Venue: Kowloon bay International Trade & Exhibition Centre
ViViD ASIA LIVE 2011 「Take-off」 in Taiwan
■Show date：Nov.19 (Sat)
■Open: 18：00 / Starts: 19：00
■Venue：The WALL TAIPEI
ViViD LIVE 2012「TAKE OFF ～Birth to the NEW WORLD～」
Jan. 7 (Sat) at Nihon Budokan
OPEN 16:00/START 17:00