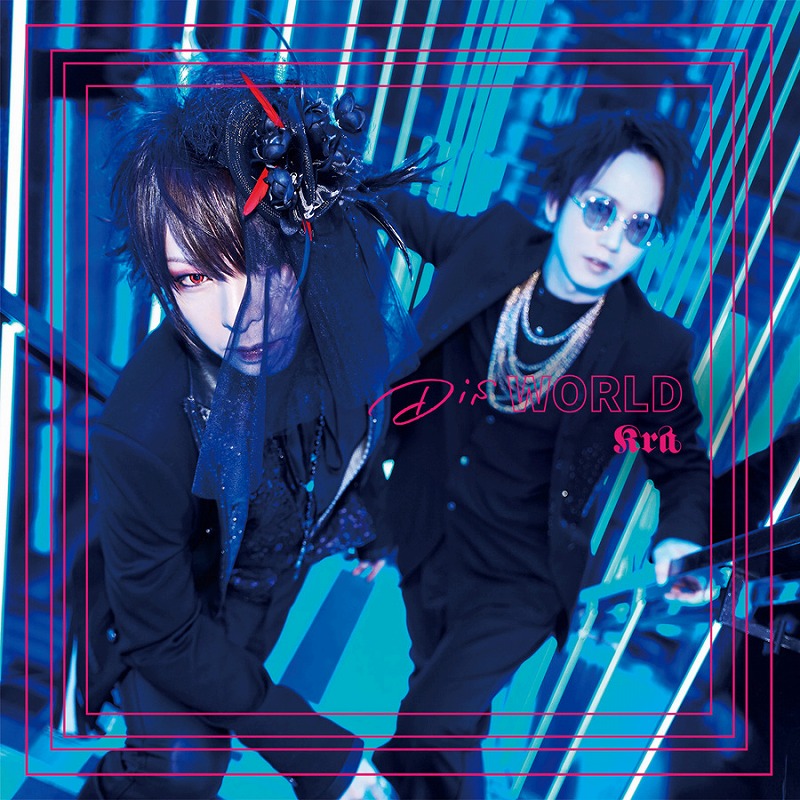 After years as a 4-piece band, Kra became a duo at the end of January last year (2019). For a year after which, Kra continued to search for “what the new Kra should be like” as they focused on concerts and live events. On their new mini album “Dis WORLD”, which will be released on 26 February (Wed), one of the answers the duo has gained through their activities this past year has taken the form of 4 thoughts (4 songs).

The mini-album is produced by Keiichi Miyako (Rayflower, SOPHIA). With his help, “Dis WORLD” has an added spice which makes it “exciting and somewhat different from before yet still very much like Kra”. Today, the members have given us insight into the feelings and thoughts they have put into the 4 songs. From here on, we present to you the charms of each of the 4 songs.

Paint and repaint the past, to take a step forward into the new world …「Dis WORLD」

The top batter and lead song of this mini album, “Dis WORLD”. With a deep and dynamic funk beat, Keiyu has declared his will “to once again search for the real world” to move towards his ideal world. Through the song “Dis WORLD”, the duo has expressed their innermost thoughts and their will to forge ahead.

Yuhra  When I first wrote “Dis WORLD”, I centered it around a funk-oriented bass phrase. When producer Miyako heard it, he said “the bass phrase has a strong impact, so while making use of that, let’s make the overall rhythm more dance music-oriented. I am sure this song will be more impressionable that way”. He added the finishing touches to the song exactly the way he had described.

Keiyu  The song itself is upbeat and makes you want to dance; however it was also a little dark. Hence I had quite some trouble with wording. Just like how I myself might think “I’m satisfied” and yet new desires keep popping up in real life, I tried to express those feeling through the lyrics “Break down the now and repaint it once again. A continuous repeat of past and future, turn it into the power to keep moving forward” in “Dis WORLD”. However, it is not that “everything will change greatly from now on”, rather, the lyrics express the stance of continuing “to overcome the limits of our abilities at the time and to remain positive as we continue to grow” just as we done so have in the past. “Dis WORLD” is really the song that expresses “Kra’s current stance”.

From the minute you hear it, your mood lifts. An up-tempo, innately cheerful tune “Kotoba ni Shitai Kotoba”. Changing midway to a bossa nova/ragga beat, the way it creates a pleasant groove is the part of the song that makes it interesting. The song shows Kra’s gratitude towards their fans with lyrics like “Stay by my side. Keep looking at me. Don’t let go of that hand” and “Because we have you, we can keep pushing forward”.

Keiyu  A song that was sprinting brightly full speed ahead turns Bossa Nova midway. That is the charm of “Kotoba ni Shitai Kotoba”.

Yuhra  “Kotoba ni Shitai Kotoba” is a song that would have been fine even with the same beat from start to end. However, after 18 years of writing songs as Kra, we felt that “we have continued to create rather straightforward songs till now” and would like to add a twist. From there, we decided to change the beat halfway into the song and give it a slower groove. While we were worried that such a bright and fast tempo song would become darker with the slowing of the tempo, this change midway was actually a great cushion in giving the song depth.

Keiyu  “Kotoba ni Shitai Kotoba” is a song of our feelings towards our fans. While I could have just talked about it during the MC sections in concerts, I generally get embarrassed and can’t express these feelings well so I end up avoiding it all together. Hence, I wrote this song with the hope of expressing these thoughts through music.

There are no rules in flying. To each his own method and hence his own rules. This reverse thinking presented by “Gyakuso no Icarus”…

Heavy sounds raining upon you right from the start. With eerie sound effects during Keiyu’s dialogue. Starting off with feelings of anxiousness, you start to remember the feelings of passion as the song reveals its majestic self. A heavier sound is created using a drop D tuning. The image of one trying fly as he searches for hope through despair and anxiousness overlaps with the image of Icarus as he once again tries to fly high towards the skies.

Keiyu  At the demo stage, the song was a lot more intense. With ideas from producer Miyako, like adding effects to my more solemn singing voice in the first verse to change the atmosphere, it became a song that was able to draw out the emotions at its core in the midst of the intensity.

Yuhra  While it is heavy with a drop D tuning, the song originally was a backbeat 8-beat number with a faster tempo. However, thinking about its prominence in the album, Miyako gave it an even heavier finish.

Keiyu  In Kra’s repertoire, there is a song, “Fu no Zenshin”, which is also draws from the story of Icarus… The lyrics to “Gyakuso no Icarus” is like a continuation of that. Since Icarus’s wings melted due to the Sun’s heat in the day which resulted in him tumbling into the ocean, wouldn’t it be fine to as long as we flew at night towards the moon? There may be many ways to achieve the same thing. “Gyakuso no Icarus” expresses this idea of finding my own way.

Till now and from now on, let’s continue this relationship forever. “2/4” is our current desires and our hopes.

From 4 people to 2. Even so, let’s continue spend our days together as before. With “2/4”, Keiyu and Yuhra declare that Kra will continue on forever. With a bright, freeing pop tune characteristic of Kra, the duo invites fans to “continue as before without changing”.

Keiyu  Even if the situation has changed, we can still continue to meet at concerts and events. That will not change. Likewise, I hope the days with fans who support us can continue on as well. This song is filled with such thoughts.

Yuhra  Like how we initially intended for it to be the lead song for this mini-album, this is a song that is very characteristic of Kra. With the feelings we have put into the lyrics and content that I think fans would be overjoyed about; it is an extension of the past Kra. In a good way. However, as we wanted to show the new Kra, “Dis WORLD” ended up as the lead track. On the other hand, “2/4” would be a song I feel long-time fans of Kra would enjoy and while it shows them our current thoughts, it is also be a song that they would probably feel at ease with.

Keiyu  With “2/4” coming after “Gyakuso no Icarus”, in a good way I feel like listeners may feel like their hearts have been saved. Rather, I would be glad if they felt that way.

Yuhra  That’s true. I feel that fans will gain a peace of mind when they listen to “2/4”.

The mini-album “Dis WORLD” was completed by painting on “new stimulus” onto the “Kra likeness”. With the release of this mini-album, Kra will also be embarking on a nationwide tour “Kra RELEASE LIVE 2020【Dis WORLD】” starting 20 March 2020. Keiyu has told us of his expectations as Kra is set to tour with new supporting band members.

Keiyu  As this is a concert tour where we welcome new supporting band members, I am excited to see what kind of stage we will create. With a change in lineup, each member’s faiths and beliefs would naturally be different and that would be reflected in Kra’s music. We would like enjoy the Kra’s music that is created by these members.

Kra will continue to push ahead without stopping. They have asserted that they will “continue to move forward aiming for each anniversary and the next”. Those are exactly the words that fans who gain emotional support from Kra will be the happiest to hear.

Yuhra  That’s because we have no reason to quit music and Kra. Kra has no definitive style of music. We will create the type of music which we wish to express at the time, as it comes.

Keiyu  Just like how the concept changes with each concert and event, we want to enjoy each style as we go. Such that our audience does not become unsettled, we want continue to maintain the characteristics of Kra even as we continue to grow older. However, when the time comes, we also want to challenge something new. We want to continue to move forward while finding a good balance.

With that sense of security in mind, Kra continues to evolve. Here’s hoping you will understand the straightforward feelings from Kra as they head towards the future through this mini-album “Dis WORLD”.