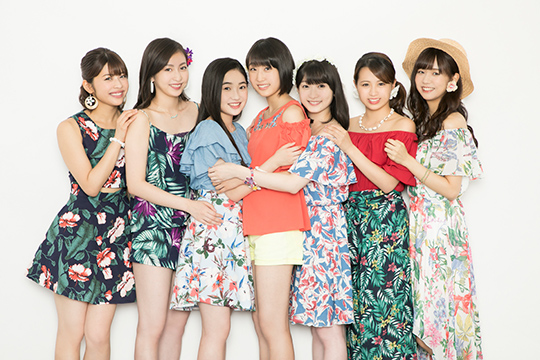 “Thank you for your support of Juice=Juice. This is an announcement about Karin Miyamoto.
Miyamoto recently has had difficulty with her voice, so last week, she performed without using her voice. Her condition had not improved thereafter, and after being tested again, Miyamoto was diagnosed with functional dysphonia.
We have had discussions with the doctor, her parents, herself and management, and have decided to take a break from all activities that will require her to use her voice. We will see how her treatment and rehabilitation goes and slowly increase her activities.
We apologize for any inconvenience. We hope you understand this situation and continue to support Juice=Juice and Karin Miyamoto.”

Also, the management revealed last month that Nanami Yanagawa from Country Girls, and Ruru Dambara, formally Hello! Pro Kenshusei, has joined Juice=Juice, transforming them into a 7-member unit. They performed as a 7 member unit for the first time in Osaka on July 15th, 2017, the first day of the Hello! Project 2017 SUMMER ~HELLO!MEETING~ / ~HELLO! GATHERING~ tour.
In addition to this announcement, management has confirmed both will be performing in the Juice=Juice LIVE AROUND 2017 World Tour, which begins in Mexico on September 8th at Foro Indie Rocks.

In performing with Juice=Juice, Nanami commented, “I was very nervous as the group never had additional members until now, but I’m having lots of fun being surrounded by fantastic sisters and Nana-chan. Just like the meaning of the name Juice=Juice, I hope to perform freshly, giving it my 100%.” Ruru commented, “I’m worried because the group was always known as 5-member unit, but all the members are so nice. I’m so excited about what’s to come. Juice=Juice is really good at their performance, so I hope I can catch up to everyone and get singing parts in the near future.”

Leader, Yuka Miyazaki, commented, “I’m really excited to see how the 7-member Juice=Juice will turn out! [Nanami] talks a lot about what Momochi-Senpai (Momoko Tsugunaga) has taught her, and it’s so cute. [Ruru] came with the dance choreography memorized, so we can count on her!”
The Juice=Juice LIVE AROUND 2017 World Tour will kick off in Mexico on September 8th in Mexico City Foro Indie Rocks and will continue on to London, England (SOLD OUT), Paris, France (SOLD OUT), and Germany on the 17th in Dortmund at FZW.

New members will perform only until 10pm under the underage labor law.