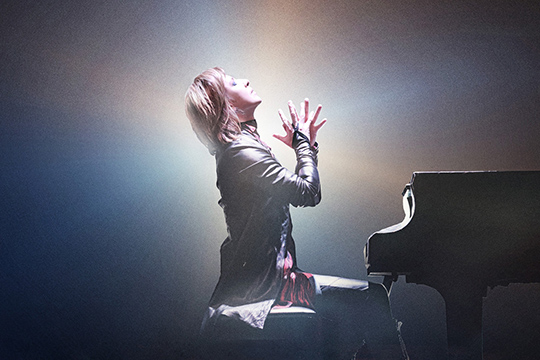 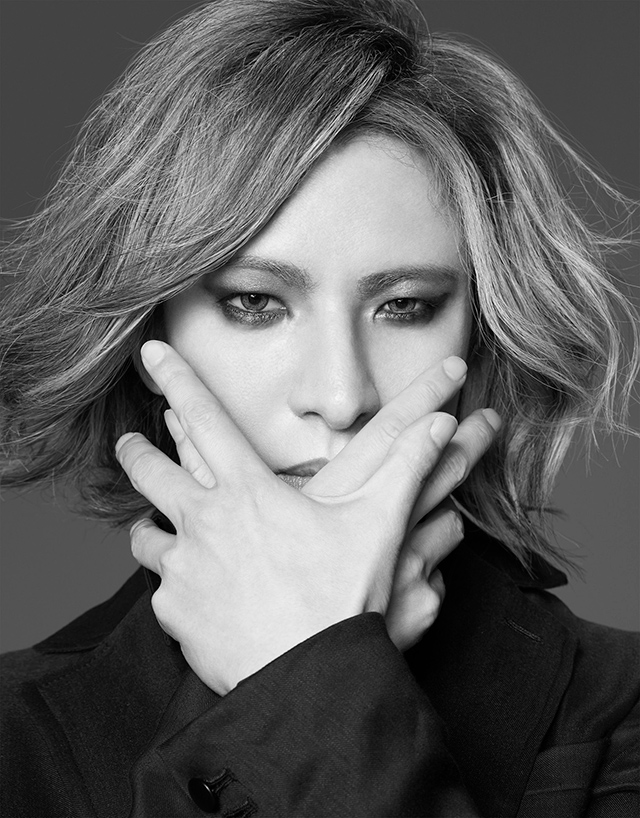 “I began taking piano lessons and music theory at age four, and became interested in classical works by Beethoven and Schubert,” explains Yoshiki. “In elementary school, I played the trumpet in the brass band, and around age ten started composing songs for piano. I’ve been writing classical music ever since. Needless to say, classical music has been a major influence in my musical career, including X Japan. I was fortunate enough to play Madison Square Garden 2 years ago with my band X Japan. Now I’m playing Carnegie Hall as a pianist with Tokyo Philharmonic Orchestra, which was another dream of mine. Words can’t describe how honored I am to be performing at such a prestigious venue with an amazing orchestra.”

For the Carnegie Hall concert, Yoshiki will perform his original compositions alongside the world-renowned Tokyo Philharmonic; he will also play several traditional classical pieces. The Tokyo Philharmonic Orchestra was named one of the Top 10 greatest orchestras in the world by CNN in 2015. This classical concert will also take place in Japan and Hong Kong. 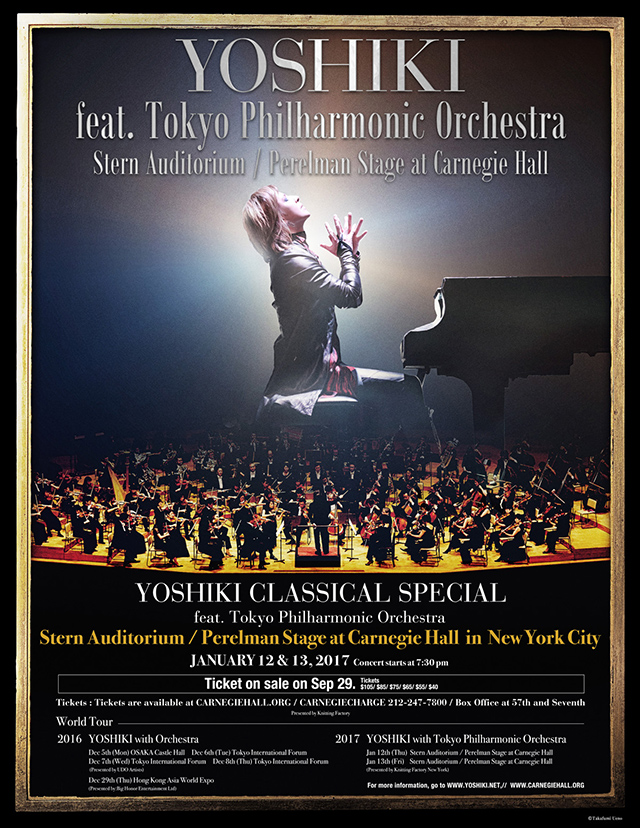 Yoshiki composed a piano concerto and performed it with a 77-piece orchestra to celebrate the tenth year of the Emperor of Japan’s reign in 1999. In 2015, he composed the theme song and conducted the Super World Orchestra at the opening ceremony of the World Expo. In 2012, Yoshiki composed the official theme song for the Golden Globes®. His classical concerts in 2014 captivated crowds earning him standing ovations and sold out shows in over 10 countries as he performed classical versions of X Japan songs and popular rock tracks with a string sextet live on stage, as well as some traditional Classical pieces. His album,Yoshiki Classical, debuted at #1 on the iTunes Classical Music chart in 10 countries around the world. Pianist Magazine raved Yoshiki Classical “is a true labor of love from a talented artist who’s made an impressive mark within the classical and rock genres.” The album featured performances by Yoshiki as both the composer and pianist with the London Philharmonic Orchestra and Tokyo City Philharmonic Orchestra. Produced by Yoshiki, the album included two songs produced by the legendary Beatles producer Sir George Martin.

In film news, the new music documentary about Yoshiki’s rock group X Japan titled We Are X, from Passion Pictures, will be released by Drafthouse Films in New York and Los Angeles on October 21, 2016, followed by nationwide expansion. Since its premiere at the 2016 Sundance Film Festival — where it was awarded the Special Jury Prize for editing — the film has continued to garner critical acclaim due to its remarkably candid portrayal of its enigmatic subject, Yoshiki, leader of the Japanese band X Japan.

Chronicling the band’s exhilarating, tumultuous and unimaginable history over the past three decades–persevering through personal, physical and spiritual heartache–the film culminates with preparations for their breathtaking concert at New York’s legendary Madison Square Garden. Directed by acclaimed documentarian Stephen Kijak (Stones in Exile, Scott Walker: 30 Century Man), We Are X is an astonishingly intimate portrait of a deeply haunted–but truly unstoppable–virtuoso and the music that has enthralled legions of the world’s most devoted fans.

X Japan has sold over 30 million singles and albums combined — captivating such a wide range of admirers as Sir George Martin, KISS, Stan Lee, and even the Japanese Emperor — and pioneered a spectacle-driven style of visual rock, creating a one-of-a-kind cultural phenomenon. The group is currently laying down tracks in a Los Angeles studio for their as-yet-untitled album, which is due for a worldwide release in early 2017.

For more information about the Yoshiki Classical album, visit: http://www.yoshiki.net/classical.html. Yoshiki is a Kawai Artist. 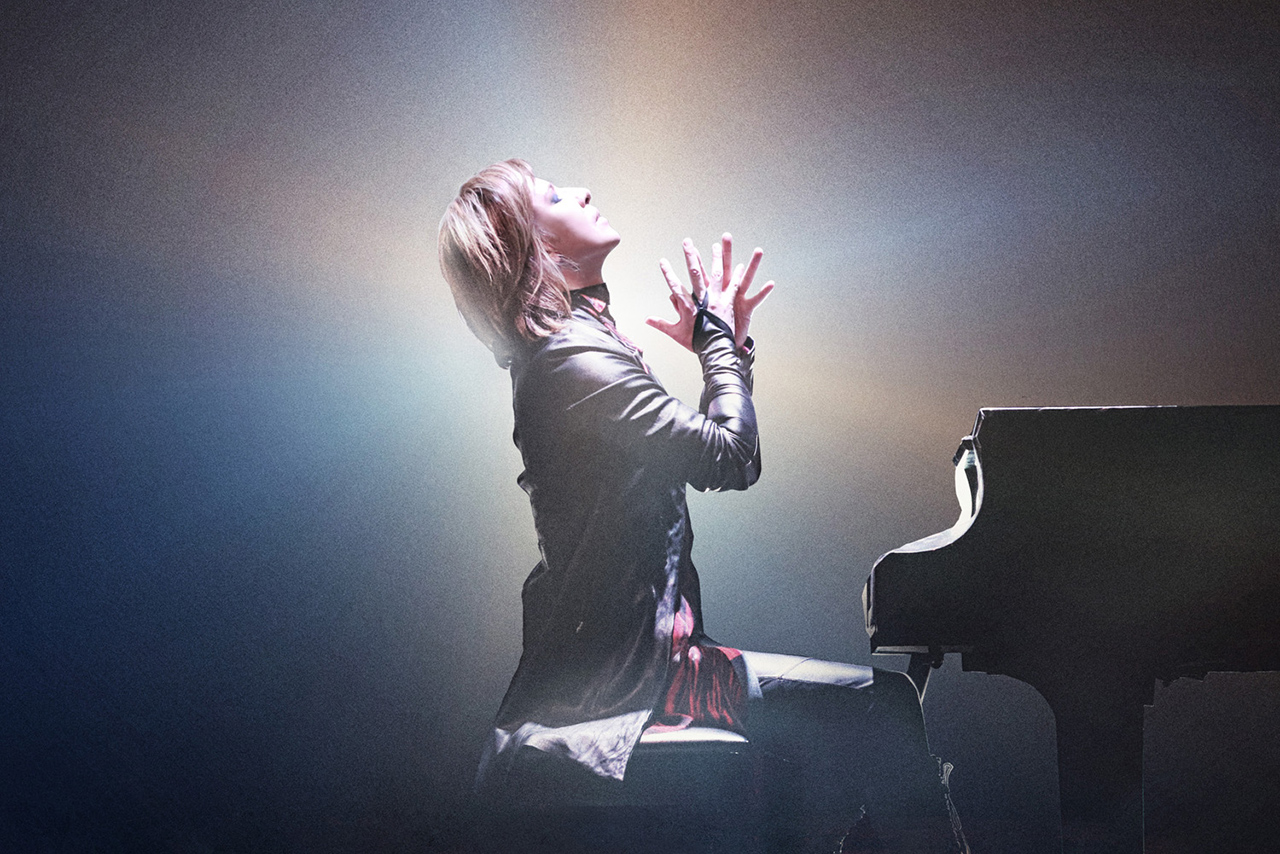