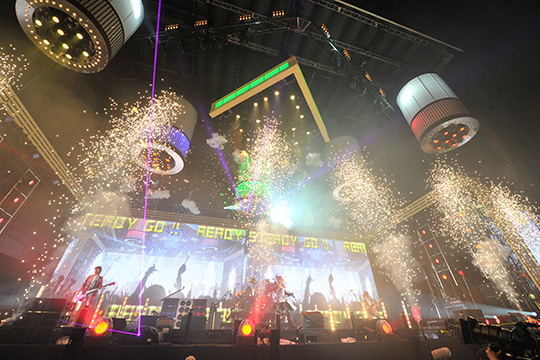 [Live Report] L’Arc~en~Ciel At Last Stage Of Japan’s National Stadium, “With Gratitude Towards the Stadium, And Dream For The Newly Born Future” — “JAPAN NIGHT” DAY 2 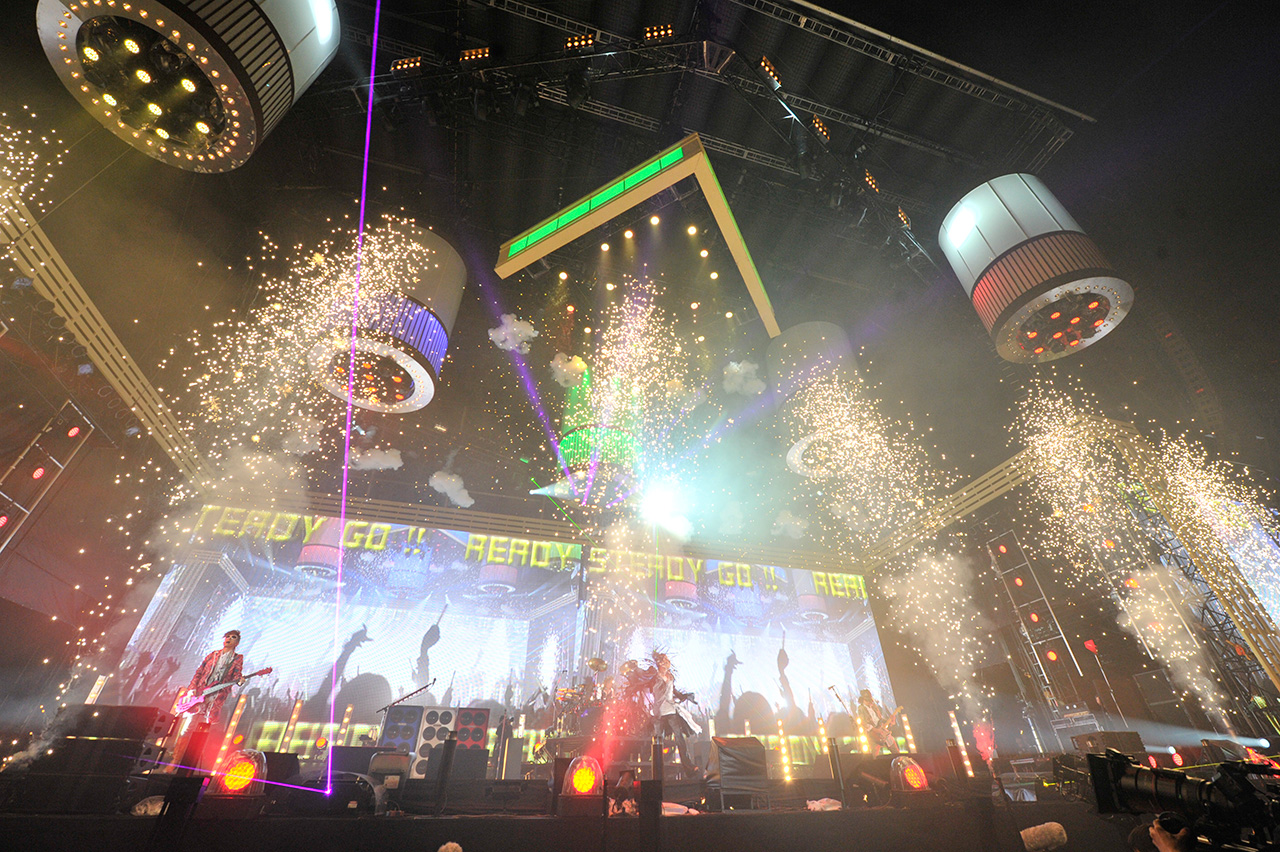 “SAYONARA Kokuritsu Kyougijo FINAL WEEK JAPNA NIGHT”, the last music event to be held at Japan’s National Stadium, was held for two days. In continuation to the 1st day “Yell for Japan”, held on the 29th, the 2nd day, “Japan to the World”, was held with the hopes for “people around the world to get to know Japan and the power of Japanese music”. The 2nd day saw four internationally successful artists: SEKAI NO OWARI, Perfume, MAN WITH A MISSION and L’Arc~en~Ciel. We would be reporting on the main act of the event by L’Arc~en~Ciel.

Out of the 13 artists to perform during the two days of “JAPAN NIGHT”, L’Arc~en~Ciel wouldl be the last to perform to bring the event back home.

This would be the first time since the final concert for “L’Arc~en~Ciel WORLD TOUR 2012” that L’Arc~en~Ciel would step onto the stage at Japan’s National Stadium. This would be the third time to performing there following “L’Arc~en~Ciel LIVE 2014 at Kokuritsu Kyougijo”, which was held for two days on March 21 and 22. The event attracted a total of 160,000 people and featured a completely open stage that could be viewed from 360° around the stage, a world-class projection mapping and more.

For an artist like L’Arc~en~Ciel, who sells out stadium tours, it is rare just to see them participate in a live event such as this one. As a result, by 8PM, the venue was filled with anxious people waiting to see what kind of setlist and what kind of a performance the big-name band has prepared for them this night. The curtains have now finally opened.

The stage kicked off with a projection mapping on the stage that looks to be nearly 100 meters wide including the runway. A cube-shaped object is projected onto the gigantic LED screen, which eventually turned in the letters “L’Arc~en~Ciel”. The crowd cheers in excitement.

The opening number of the show was “CHASE”. With a fast-paced, upward turbulent number to kick off the show, the entire audience stands up in glee. As hyde taunts the audience, ken crunches some heavy riffs with his guitar, yukihiro pounds out his immaculate drum beats while tetsuya plays his bass phrases that crawl freely about. With no further ado, the next song in line was “READY STEADY GO”. An airburst accompanied by a deafening sound lights the hearts of the 60,000 people there. The barrage of hit tunes performed from the get go was an indication of how insane the concert was going to be.

“We are honored to be invited to this last stage. Thank you. Let’s all have fun and leave no regrets! Let’s burn out!”
As if to be led by these words by hyde, a column of fire sprung up from the roof and the front of the stage to cue the beginning of the next tune “DRINK IT DOWN”. The venue was lit with voluptuous laser and LED stick light during “XXX”. One single track after another were performed. hyde opens up “BLESS” with an a cappella, filling up the venue with his beautiful voice. The solo performance during this song, which was used as the theme song for NHK Vancouver 2010, is a fitting performance to celebrating this monumental day for Japan’s National Stadium, which was bet 56 years ago in the aim to promote the Tokyo Olympics. The blue-glowing LED stick lights held by the fans, create a carpet of stars on the floor taking the lyrics of “dreams” and “celebration” to endless heights –an incredibly dramatic scene.

hyde straps a guitar on his shoulder and begins playing “HONEY”. The second half of the show saw a bombardment of crowd-pleasing live tunes including “Driver’s High” and “Link”. Their momentum shows no signs of dwindling. ken’s guitar solo is superb in “HONEY” and the fireworks and columns of fire amplifies the uplifting feel of “Driver’s High”. Of course, when it comes down to it, the crowd wouldn’t be going this crazy if it weren’t for the high musicianship of the members. If we include the two days from their one-man shows, this was the fifth time within the last two years for the band to step onto the stage of the sanctuary, Japan’s National Stadium. The mighty powers of the four members blast the audience with boulders of sound.

The top-notch ensemble featured in “Link” was nothing short of jaw dropping. Although the tune is predominantly catchy with its pop melodies, the strong groove strikes the hearts of the audience. Despite being able to distinguish every individual sound, they all come together to create an enormous group.

“This would probably be the last time to see such an open scenery. We’d like for you all to imprint this scene in your minds before going home. Yes, this would be the last time to stand on this stage. We’d like to perform with gratitude towards the history of this stadium, which has been host to many heart-moving performance, and with dreams for the newly born future to come.”

The last number of the show after these words was “MY HEART DRAWS A DREAM”. The mirror ball that rotates above the stage colors a fantastic night while balloons in seven colors get released. As the 60,000 people sing along, “Yume wo Egakuyo Our hearts draw a dream”, the 9-song, 45-minute show came to a close. The numerous fireworks that was sent up into the sky was a celebration of the success of the last music event held at Japan’s National Stadium.

The show was a sprint from start to finish, which allowed no room for breathing. Japan’s National Stadium, which will be bringing its 56 years of history, will be closing on May 31, 2014. It is scheduled to be reborn in 2019. The band, who left the stage leaving the words, “Let’s meet here again”, will give birth to more epic drama in the future. We wait eagerly for that day to come. 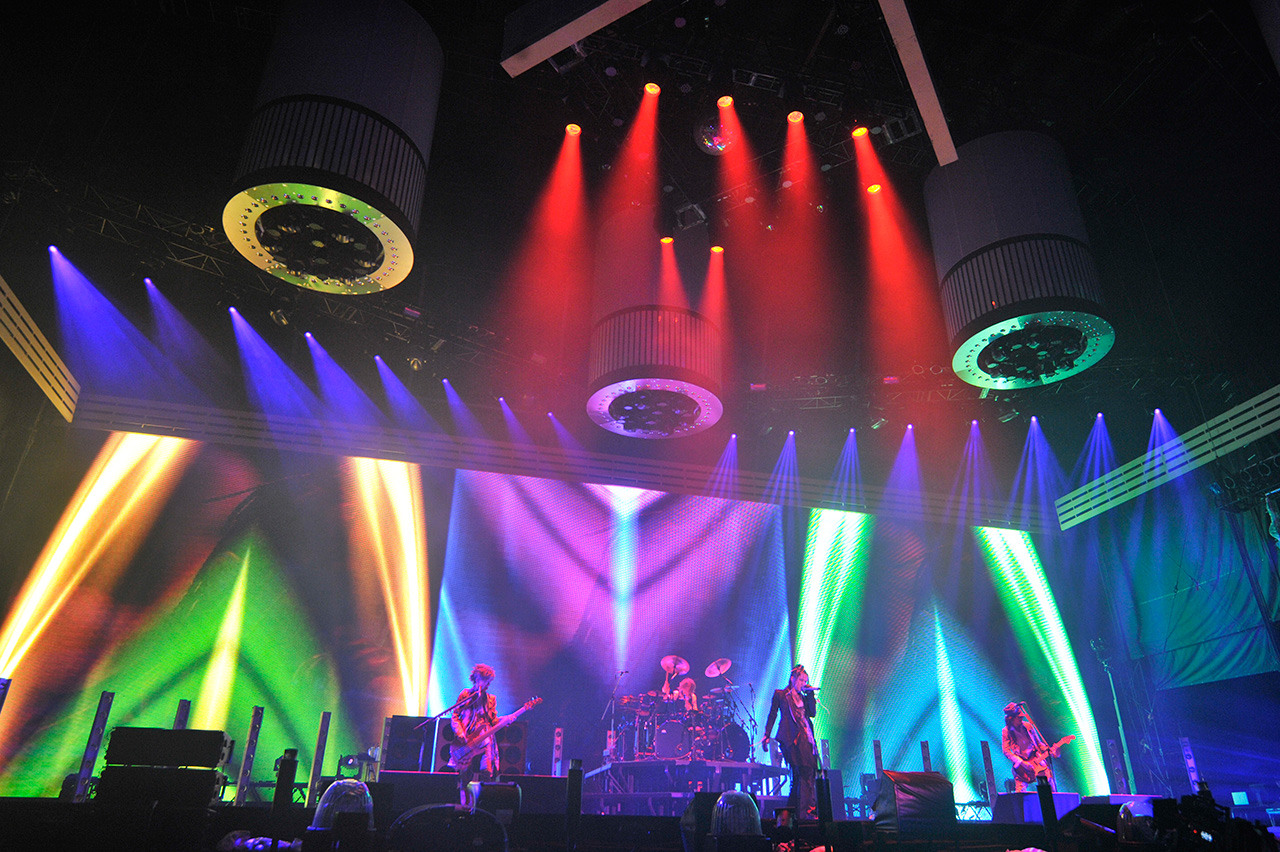 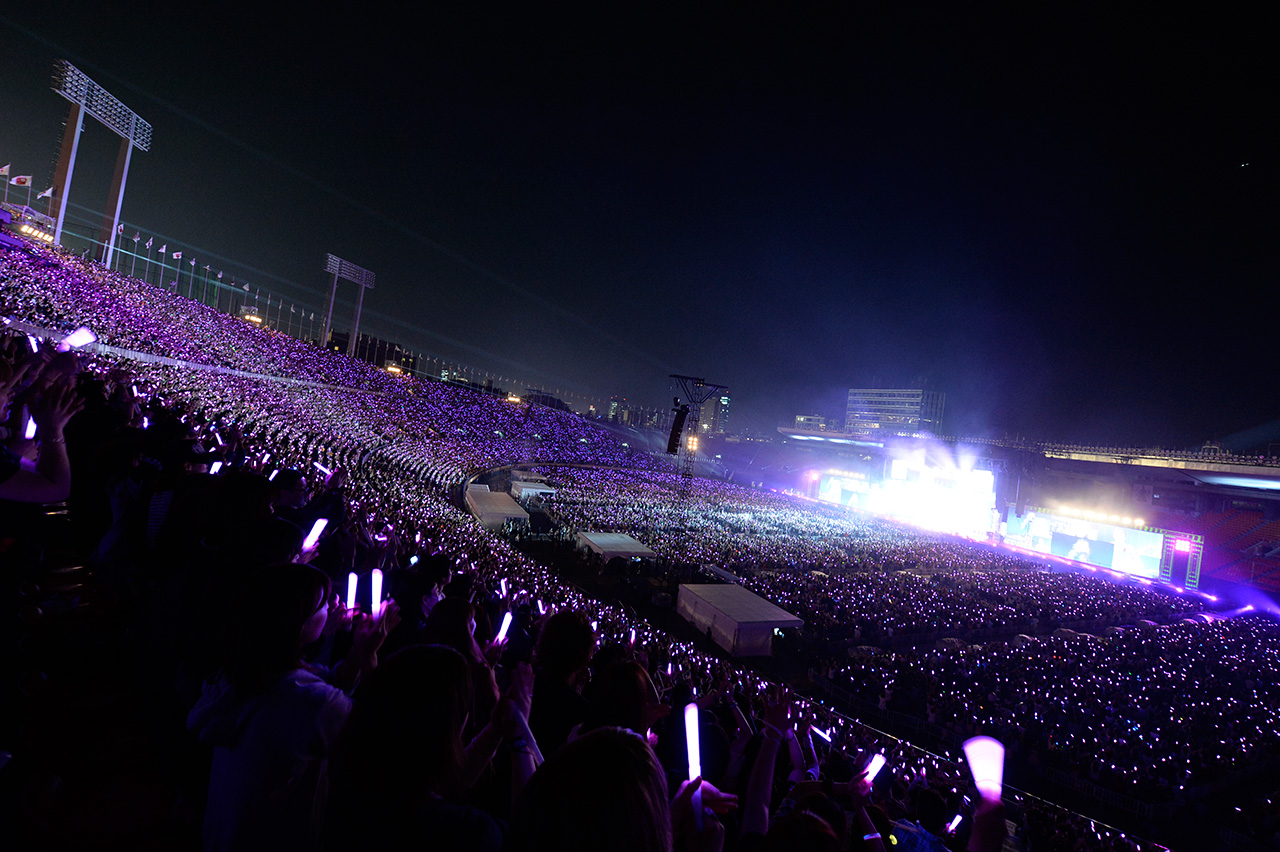 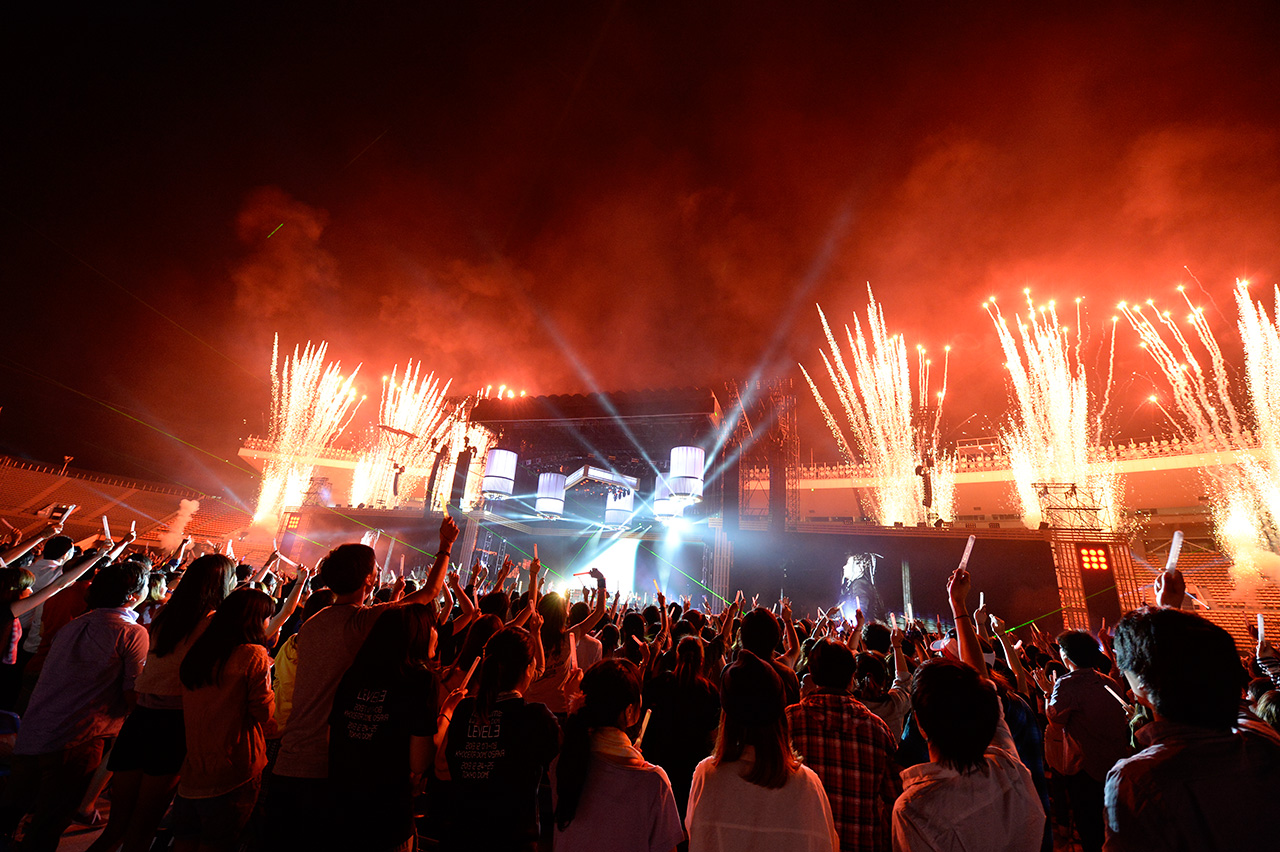 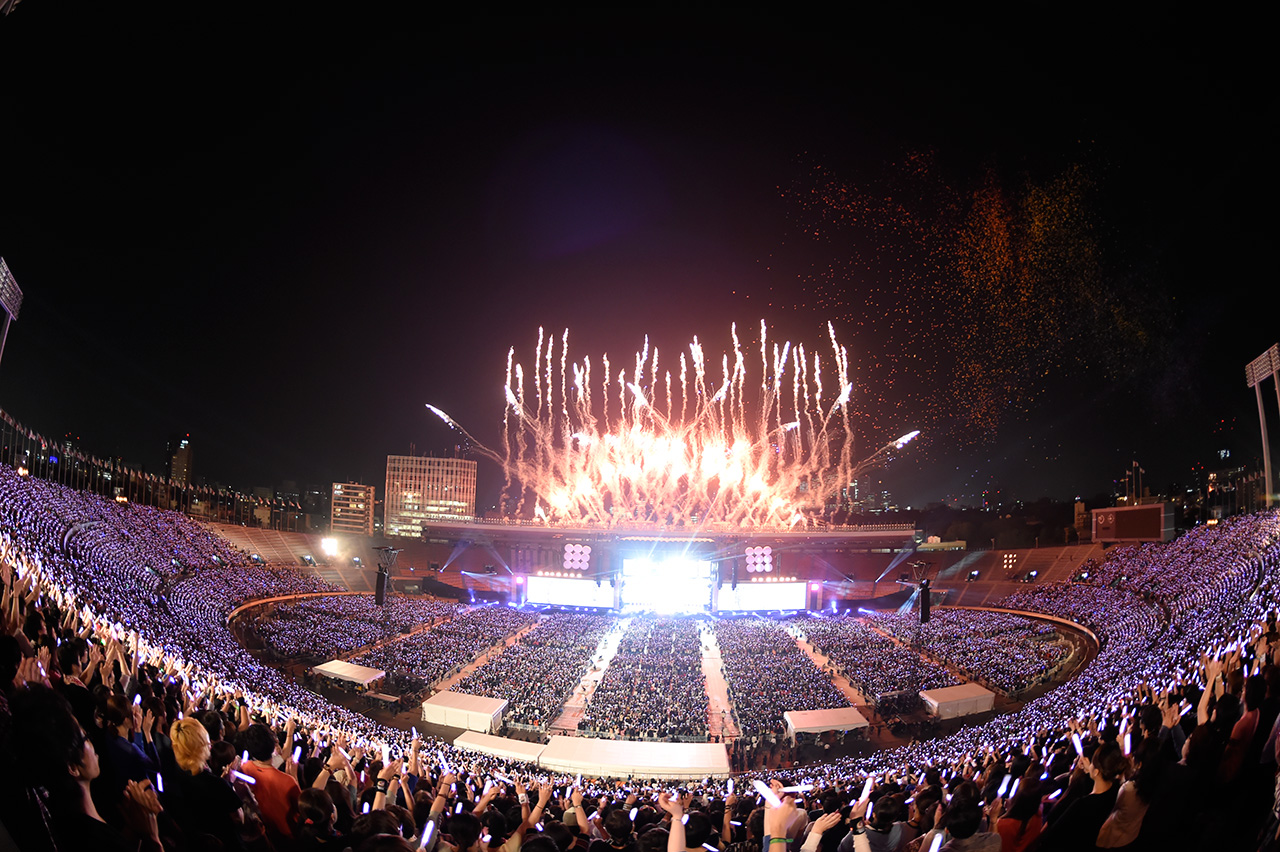