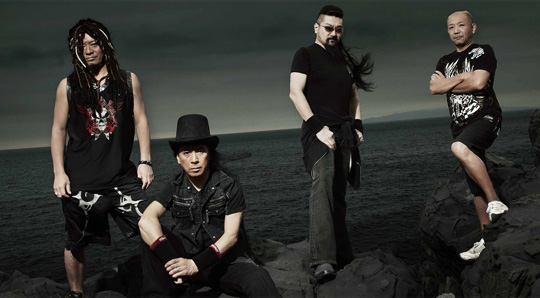 Japan’s one and only Metal Band, LOUDNESS. Performing at different overseas fests, and is receiving praise from around the world.

First of all, the held on March 17th and 18th was literally a cruising live party in the middle of the Caribbean. Leading bands of the 80s such as Cinderella, Queensrÿche, Saxon, Stryper, and L.A.GUNS all got together and LOUDNESS, the only Japanese to be invited there showed a high level performance and met the audience`s expectations.

was held in Brazil on the 14th of April. Along with Angra, Twisted Sister, and Metal Church, LOUDNESS without their vocal Minoru Niihara, instead had IURI SANSON (HIBRIA) for vocal, and their first stage in Brazil was a great stage that awed the audience of 10,000!

On May 4th they appeared in , held in Maryland, USA. This fest also mainly had leading bands of the 80s such as Twisted Sister, Steel Panther, Bret Michaels (POISON), and KIX, and had a crowd of about 20,000. LOUDNESS, who had also appeared the year before as well, performed on main stage this year and captured the attention of the 20,000 audience. A long line was created by people who wished to shake hands with them after the stage, and displayed their popularity. LOUDNESS has a busy schedule awaiting them, with a performance coming up in Malaysia on the 29th of June, and within Japan an additional performance of at ZEPP TOKYO on June 16th (Sun.), an appearance at on July 7th at Hibiya Open-Air Concert Hall. They are planning to have a full-blown worldwide action on 2014 such as a worldwide album release and world tours and more!