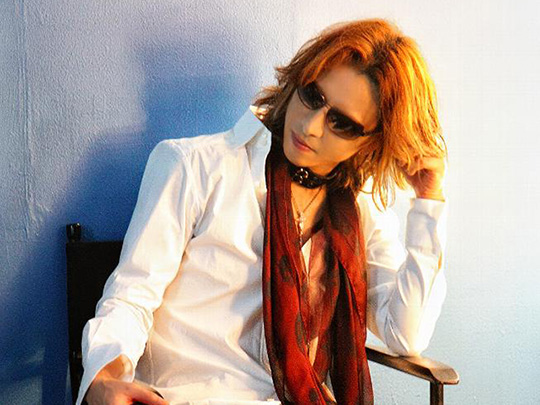 Golden Globe Awards® Theme composed by Japanese music superstar YOSHIKI to be digitally released on iTunes in 111 countries on January 15, 2013

HOLLYWOOD, CA, December 20, 2013 – In celebration of the 70th Anniversary of the Golden Globe Awards®, the show’s musical theme, composed by Japanese superstar Yoshiki, will soon be available for download on iTunes. Written for the awards ceremony by the classically trained multi-instrumentalist and leader of one of Japan’s most successful rock groups, X-Japan, the theme will be available for download as a full-length digital single in 111 countries starting January 15, 2013. All proceeds from sales of the single will be donated to charity.

“It’s such an honor to be a part of this esteemed event which is enjoyed by hundreds of millions around the world,” said Yoshiki. “Composing this music was a journey that involved creating numerous versions in order to arrive at just the right sound to capture the unique combination of glamour and edginess that makes the Golden Globe Awards so entertaining. I’m very proud of the result and am thrilled that Warner Music has chosen to make it available around the world.”

“To have world-renowned musician Yoshiki compose the theme song for the Golden Globes is an honor for the Hollywood Foreign Press Association and we are delighted that the single is now being released worldwide,” said HFPA President Dr. Aida Takla-O’Reilly. “Our international organization recognizes the most accomplished entertainers in film, television and music, and Yoshiki certainly fits right in among our honorees,”

The 70th Annual Golden Globe® Awards will air LIVE coast-to-coast on NBC on Sunday, January 13, 2013, with the pre-show from 4:00-5:00p.m. (PST)/7:00-8:00 p.m. (EST), and main telecast from 5:00-8:00 p.m. (PST)/8:00-11:00 p.m. (EST) from the Beverly Hilton Hotel with hosts Tina Fey and Amy Poehler. The Golden Globe Awards will be seen in more than 192 countries worldwide and is one of the few awards ceremonies that span both television and motion picture achievements. The special will be produced by dick clark productions in association with the Hollywood Foreign Press Association.

About Yoshiki
Yoshiki, one of Asia’s most influential music artists and biggest rock icons, is a songwriter, drummer and classically-trained pianist. His rock group X Japan has sold 30 million singles and albums combined and filled the 55,000-seat Toyko Dome a record 18 times. Now the band’s popularity is spreading throughout the world, having recently completed a sold-out World Tour, performing in North America, Europe, Latin America, and South East Asia. In 1999, Yoshiki composed a piano concerto that he performed with a 77-piece orchestra to celebrate the tenth year of the Emperor of Japan’s reign. In 2005, Yoshiki composed the theme song and conducted the Super World Orchestra at the opening ceremony of the World Expo. Previously, Yoshiki also recorded a classical album co-produced and arranged by acclaimed Beatles producer.

About the Hollywood Foreign Press Association:
Founded in the 1940s during World War II, the HFPA was originally comprised of a handful of LA based overseas journalists who sought to bridge the international community with Hollywood, and to provide distraction from the hardships of war through film. Sixty-eight years later, members of the HFPA represent 55 countries with a combined readership of 250 million in some of the world’s most respected publications. Each year, the organization holds the third most watched awards show on television, the Golden Globe Awards, which have enabled the organization to donate more than $12 million to entertainment related charities and scholarship programs. For more information, please visit www.goldenglobes.org, and follow us on Twitter (@goldenglobes), Instagram (@goldenglobes / #goldenglobes), and Facebook (http://www.facebook.com/goldenglobes) for exclusive celebrity videos and up to the minute Golden Globes news!

About dick clark productions, inc.:
Founded in 1957, dick clark productions, inc. (dcp) is a leading independent producer of television programming. dcp produces perennial hits such as the “American Music Awards,” “Golden Globe Awards,” “Academy of Country Music Awards,” and “Dick Clark’s New Year’s Rockin’ Eve with Ryan Seacrest.” dcp also produces popular weekly television programming, including “So You Think You Can Dance,” and owns and maintains one of the world’s most unique and extensive entertainment libraries, which includes more than 30 years of “American Bandstand” footage. For additional information about dcp, please visit http://www.dickclarkproductions.com.

About Warner Music:
With its broad roster of new stars and legendary artists, Warner Music Group is home to a collection of the best-known record labels in the music industry including Asylum, Atlantic, Cordless, East West, Elektra, Nonesuch, Reprise, Rhino, Roadrunner, Rykodisc, Sire, Warner Bros. and Word, as well as Warner/Chappell Music, one of the world’s leading music publishers, with a catalog of more than one million copyrights worldwide.