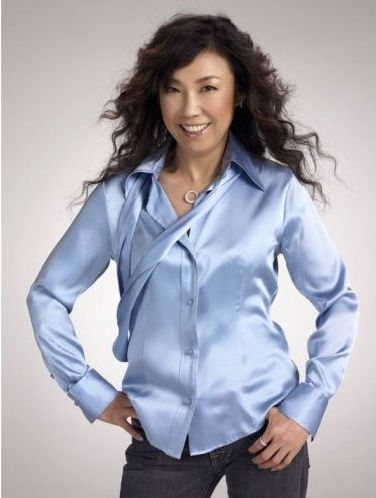 Yumi Matsutōya (born January 19, 1954) is a Japanese singer-songwriter. She was born in Hachioji, Tokyo. Her nickname is Yuming, which she received at the age of 13 from a Chinese artist, who inspired her to take on a career in music. Her first 4 albums are released under her birth name Yumi Arai.
In 1972, she released her debut single ‘Henji wa Iranai’ (, which roughly translates to “No Response Necessary”). The next year she released her first album ‘Hikoki-gumo’ (“Contrail”). From her debut until the 1976 release of her album “The 14th Moon,” she was known as Yumi Arai.
Also in 1976, at the age of 22, she married her producer, Masataka Matsutoya, and from then on she went by her new name Yumi Matsutoya. In 1990, she received a gold disc grand prix. She also made appearances in many television commercials. Fans take note of her singing talent as well as her unique singing voice.
She became famous for many songs, including Hikoki-gumo and ‘Haru yo, Koi’ (1994, “Spring, Come”) which was used as the opening theme song for a TV drama by the same name. Her song ‘Rouge no Den’gon’ ( “Rouge Message”) is featured in the anime film Kiki’s Delivery Service from the famed Studio Ghibli.
As reported on various websites, Yuming also writes songs for other singers, using the pen name Kureta Karuho.
Official Website: http://yuming.co.jp/
Facebook: http://www.facebook.com/yuming.official
Twitter: http://www.facebook.com/yuming.official/app_2231777543
EMI Music Japan: http://www.emimusic.jp/artist/yuming/