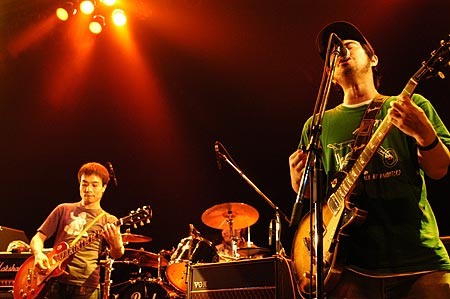 HUSKING BEE is a japanese rock band formed in 1994.
Their sound, which contains emotionally-charged vocals, is complemented by impressive musicianship. The rhythm section thrives in this band, as it is able to create an atmosphere with its own frantic, punchy playfulness.
The band officially disbanded on March 6, 2005. After 7 years were passed, the band was reunited DEVILOCK NIGHT THE FINAL in Feb 25th, 2012.
The members of the band are:
Isobe Masafumi (vocals, guitar)
Kudo “Tekkin” Tetsuya (bass)
Hiramoto Leona (drums)
Hirabayashi Kazuya (vocals, guitar)
Official Website: http://www.ini-ini.com/ini/huskin.html
Masafumi Isobe Website: http://www.isobemasafumi.com/