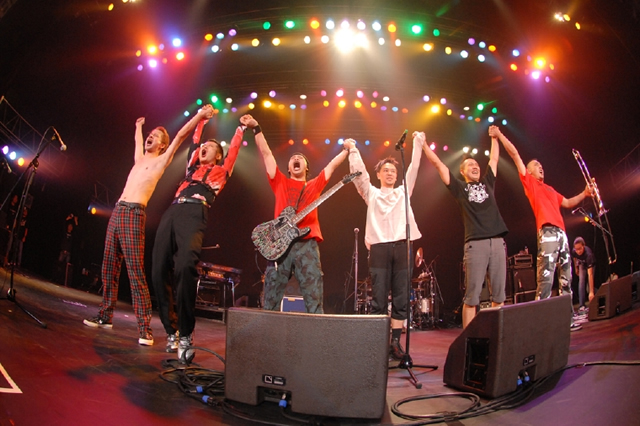 One of Japan’s most successful ska bands, Lä-Ppisch have migrated from their early Madness-inspired sound, to a broad scope of hard rock and psychedelia, steadily releasing an album a year since their debut in 1986. The band was formed in 1985 in Tokyo, based around high-school friends Magumi (real name: Kyoichi Fukuda; vocals) and Kyoichi Sugimoto (guitar). The two originally had a band in their hometown of Kumamoto, but on coming to Tokyo, they recruited Gen Ueda (keyboards, second vocals), bass man Tatsu Todoroki, and drummer Yukiyoshi (real name: Kaneko Koujuu). Ueda and Sugimoto remain the main songwriters in the group, and their styles are quite distinctive; Ueda is melody-based and Sugimoto is riff based.
The group made their first appearance at the well-known Shinjuki Loft, and soon signed a deal with Captain records, who released the four-song EP Animal Beat. Their major-label break came when they opened for Fishbone on their 1986 Japan tour, and the band signed to Victor Records, releasing “Paya Paya” in September of 1987. The song made the charts and the following album, Lä-Ppisch, two months later brought them national recognition. In 1989, the band toured the East Coast of the States, and recorded with Todd Rundgren, producing the mixed-result Karakuri House. Upon returning, the band continued to play to sell-out crowds in such arenas as Nakano Sun Plaza Hall, and NHK Hall. In 1991, Gen Ueda released his first solo record, Coriander.
Around 1992, the band began to leave their ska sounds behind and, like many other bands (Madness, the Police, No Doubt) developed a more rock-based sound. In 1996, Sugimoto released his solo effort, Picture Music, then formed a side group called the Analers, releasing their first album in 2000. The band continue to record, DJ, produce, and perform, though maybe not at their original rate, but they remain consistently interesting.
Official Website: http://la-ppisch.com/
Victor Entertainment: http://www.jvcmusic.co.jp/-/Artist/A000268.html