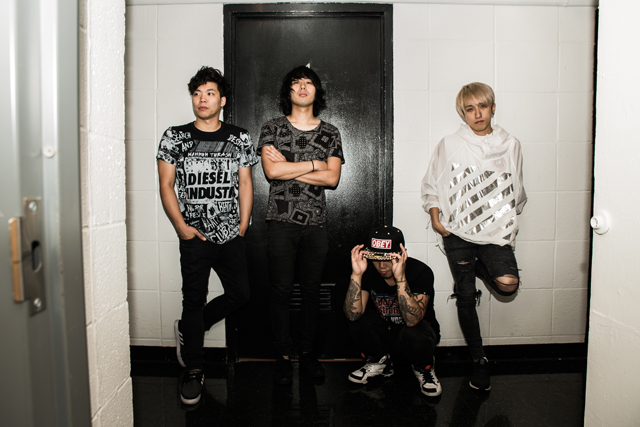 BACK-ON’s combination of metal riffs, hip-hop poses, emo angst and electronic atmospherics has seen them cause a stir of sorts in the Tokyo club scene since the five-piece first started gigging in 2002. It’s a sound not dissimilar to big-selling contemporaries such as RIZE, whose member Jesse gave BACK-ON their name.
BACK-ON was originally comprised of MC TEEDA, vocalist/MC KENJI03 (read as “Kenji Three”), guitarist SHU, bassist GORI and MACCHIN on drums (later replaced by ICCHAN). KENJI03 and GORI have been friends since childhood having attended the same primary school in Tokyo’s Adachi Ward, a district that by Japanese standards is rife with crime and high-density, public-housing apartment blocks. Though Adachi isn’t Compton – ghetto it most certainly ain’t – this less than glamorous background is a big part of BACK-ON’s identity, giving the band something approaching a genuine street edge compared to Japan’s other bling-oriented rock-rap acts.
BACK-ON debuted with the mini-album “Adachi Tribe” in October 2004. The band also contributed tracks to underground hip-hop compilations and by the end of the year were attracting 200 fans to club shows in Tokyo’s Shibuya district. The following year BACK-ON kept the momentum going with constant touring – by the end of 2005 the band had clocked up more than 100 shows in a year – including gigs with like-minded bands such as RIZE and Screaming Soul Hill, and recording their debut “major” release, “Baby Rock,” for Avex Trax’s rock-oriented subsidiary imprint label, Cutting Edge.
But it was BACK-ON’s next release, the 2006 single “Chain,” that truly launched the band, the song receiving a boost by being chosen as the opening theme song to TV Tokyo’s animate “Air Gear,” a series that has also been licensed in the U.S. Typically, the track featured TEEDA’s rapping and a chorus sung by KENJI03. Another mini-album “New World” followed in November.
BACK-ON kept the anime connection going in 2007 by providing the opening theme, “Hikari Sasuhou,” to the direct-to-video title “Murder Princess” and contributing the songs “A day dreaming…” and “BLAZE LINE” to “Eye Shield 21.” Logical, then, that the group should also perform at the anime fan conventions Anime Matsuri in Houston and Anime Evolution in British Columbia, Canada.
Official Website: http://www.back-on.com/
Twitter: http://twitter.com/info_backon
Facebook: http://www.facebook.com/BACKON.JAPAN
YouTube: http://www.youtube.com/watch?feature=player_embedded&v=TjqHyYy-rZA#!
Blog: http://ameblo.jp/back-on/
Myspace: http://www.myspace.com/backonjapan