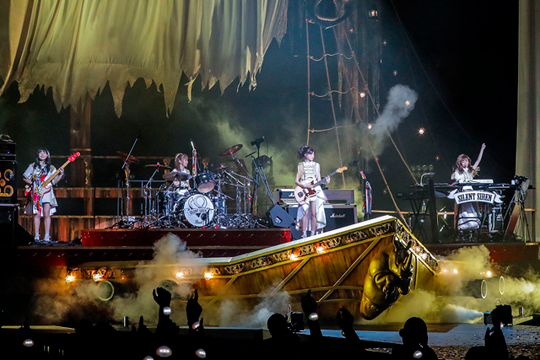 SILENT SIREN sets sail for night of miracles at Budokan 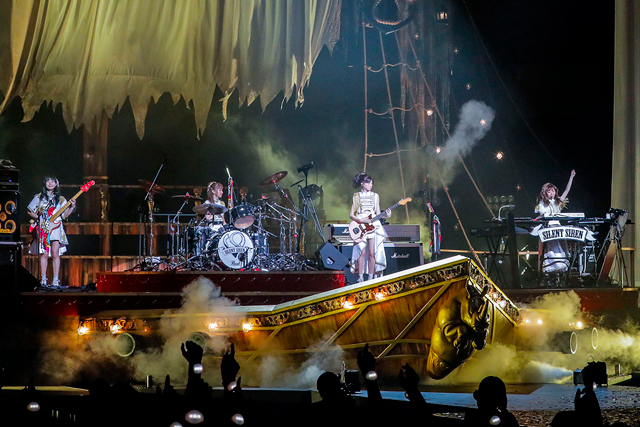 On November 13 and 14, on the fifth anniversary of their major-label debut, SILENT SIREN held the final Japanese performances of their 26-show tour, “5th ANNIVERSARY SILENT SIREN LIVE TOUR 2017 — The New World” at Nippon Budokan. Following their Nippon Budokan debut on January 17, 2015, this was the all-female band’s second appearance at Japan’s rock mecca, this time holding a back-to-back two-day event.

On November 13th, the first day of the “Miracle” event, SILENT SIREN played a set centered around the defining songs of their five-year history since their major-label debut, also including rare songs reaching back to their formation two years before that. The band ended their show with a crowd-pleasing encore of “Fujiyama Disco”, their first single released from Universal EMI Records in March earlier this year.

On the second day of the event, November 14th, which marked their official fifth anniversary date, the show opened with “Fujiyama Disco,” transporting the audience to the closing moments of the night before and picking up the energy of the event right where they left off.

The lights came up on a stage transformed into a massive sailing vessel and revealing the four performers, Suu (vocals, guitar), Ainyan (bass), Hinanchu (drums), and Yukarun (keyboard) dressed as navy sailors in white uniforms. Suu kicked-off the show by shouting to the crowd, “Let’s all make tonight a night of miracles!”
With those exciting words, SILENT SIREN surprised the crowd by playing hit tunes that were not included in the line-up the day before, such as “Yoshida San”, “What show is it?”, and “Soukai Rock”.

At center stage, a familiar sight to all SILENT SIREN concert-goers, was the “Sai-Sai Corner”, where band members played a variety of games in between performances. In the heated final showdown, Suu and Ainyan were defeated and agreed to participate in a “Giant Crocodile Challenge” as punishment at a later date.

During the song “Awa-Awa,” where the audience participated in the fun and famously cheerful dance, Kuro-chan from the Japanese comedy trio Yasuda Dai Circus made a surprise guest appearance as an Awa-Awa dancer.

SILENT SIREN filled the night’s concert with popular songs they’ve released since their label change, such as the joyful winter song, “Fuyumegu”, “AKANE”, “Kaleidoscope”, and their latest single, “Just Meet”. For the climax of the show, the band and their fans turned Nipppon Budokan into a giant dance floor with “DanceMusiQ,” followed by their world-famous song “Cherry Bomb”.

Suu then addressed the crowd to speak about the reason they named their tour “The New World” – “Life is a journey and you never know what’s going to happen. But once you overcome all that troubles you, that angers you, and that makes you sad, what you’ll find waiting for you on the other side is a happy place — a ‘New World’. We want to keep looking forward and continue to do our best to take you all to that special place.”
To end their set, they performed “Sinbad”, a special unreleased song they’ve only ever performed live, as the voices of the audience singing the chorus together echoed through the concert hall.

For the encore, Suu yelled out, “We have a super poppy song for you all!” and performed a new unreleased song called “PaPaYaPaYaPa”, followed by the high-energy “Bii-san” to end the fifth anniversary celebration.

SILENT SIREN WORLD TOUR 2017 “The New World” extends next month with their return to the United States for concerts in Hollywood (Dec. 1) and San Francisco (Dec. 3). VIP packages are available including handshakes, a photo, and an exclusive souvenir.

On December 27th, SILENT SIREN will release their fifth album, GIRLS POWER, which will be their first album release from Universal EMI, and their first full album in almost two years.

Additionally, on January 10th, 2018, the band will perform their first solo concert of the new year, called “SILENT SIREN New Year Live 2018 ~ The year of the dog ~” at Shibuya’s TSUTAYA O-EAST. The following month, on February 11th, they will hold a live event called “SILENT SIREN SAI-FAM VS. SAI-SAI” at Tokyo-EX THEATER ROPPONGI.

SILENT SIREN also announced that they will kick off their 32-show cross-country “Girls will be Bears Tour” on March 18th. From the many great experiences that the SILENT SIREN performers had thanks to the undying support from SAI-FAM (“SAI-SAI Family” = SILENT SIREN fans), SILENT SIREN’s ship continues to sail toward with countless “miracles” toward “A New World,” and toward their tenth anniversary performance.