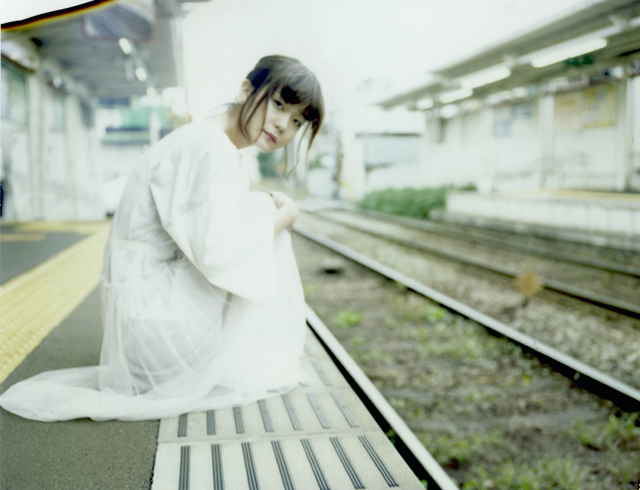 Kayoko Yoshizawa was born in 1990 in Kawaguchi city Saitama, growing up in Casting factory city.
Inspired by her father, she grew up listening to Yosui Inoue, starting to write music at the age of 16.
In November 2010, she won both grand prix and audience award at “The 4th Music Revolution”JAPAN FINAL” held by YAMAHA.
In June 2013, she released her first indie EP “Majo Zukan”, followed by a full house solo show held at Shibuya Duo Music Exchange in November.
Also, she was introduced at “Moshi Ure “ section on “Music Ru TV” aired on TV Asahi, recommended by Hyadain and Sho Ayanokoji, complimented as “Kawaii” “So Unique!”, which created a buzz.
On May 14th 2014, she released her major debut EP “Henshin Shojo”.
The single “Bishojo” was picked as the power-play by 36 radio FM/AM stations and ranked 1st in Oricon FM J-pop Power-play ranking. The solo show held in June titled “Kayoko Metamorphose” was sold out and she also did narration for “WALK BAZAR” for UNY’s TV commercial.
On October 22nd, she released her second major label EP titled “Gen Club” and went on to her first Tokyo-Osaka-Nagoya tour “Moso Ochakai Tour” from the 22nd of November, followed by eight spin-off shows between the 5th and 28th of December.
On March 4th 2015, she released her first album titled “Hoki Boshi Zukan”, followed by “Kayoko Yoshizawa Hoki Boshi Tour ’15”, starting May 9th. In October, she released her 3rd album “Himitsu Koen”, and the promotional tour “Himitsu Tour 8 Toshi wo Meguru Himitsu Koen” was all sold out.
On the 17th of February 2016, she dropped her second album “Tokyo Zekkei” and went on to a nationwide tour including hall shows in Tokyo, Nagoya and Osaka.
Official Website:http://yoshizawakayoko.com
Twitter : https://twitter.com/yoshizawakayoko