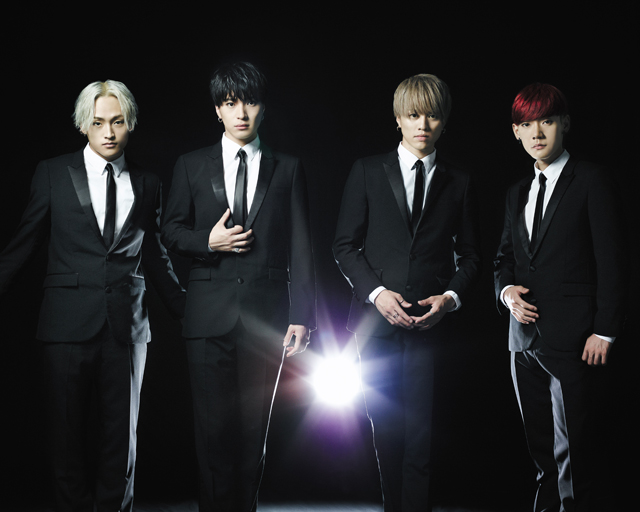 YUYA, KODAI, T-MAX, SHOTA, JUKIYA make up this Kansai-born definitive vocal and dance group.
X4 was formed in 2015, centered around YUYA (Yuya Matsushita) who was already an actor back then.
On February 22nd 2015, they released their first album “XVISION”, and although an indies group, it hit 1st place in the iTunes R&B charts.
From March 20th to April 29th 2015, they went on their “X4 LIVE TOUR 2015 -XVISION-”, touring 20 locations in Japan in just one month. Their tour final at TSUTAYA O-EAST was completely sold out. Being an indies group meant little for their phenomenal speed and stride has drawn much attention.
On June 13th 2015, their single “Koe ni shitara” was digitally released and achieved number one in the iTunes R&B charts.
During their live show at Daikanyama UNIT on June 25th 2015, they announced TEICHIKU ENTERTAINMENT’s launching of X4 dedicated label “XVISION” and their major record release.
Starting July, they went on their national tour “X4 LIVE TOUR 2015 -NEXTVISION-”.
On October 7th 2015, they released their first major single “Killing Me”.
They ranked number one in the iTunes R&B chart, and number 10 on October 19th’s Oricon Weekly Single Rankings (number 3 in the daily rankings) . They started their “X4 LIVE TOUR 2015 ~Killing Me~” on October 21st, touring 15 locations around Japan. Their greatly successful tour final was at Shinagawa Stellar Ball, their biggest venue yet.
Following their “consecutive release” announcement in January 2016, they digitally released “obsession” in January, and “IDKYN (I don’t know your name)” in February, both hitting number one in the iTunes R&B charts. In February 2016, they announced the addition of two new members, SHOTA and JUKIYA.
With this new formation they will release their single “Party Up!!” in March and start their 23 location national tour on April 1st in Tokyo’s ZEPP Diver City and end at Osaka’s Namba Hatch. All of their released songs have hit number one in the R&B digital music charts.
Official Website: https://xxxx4.jp/
Twitter: https://twitter.com/x4staff
Facebook: https://www.facebook.com/x4japan
YouTube: https://www.youtube.com/channel/UCGzp0jKJu7LuoYQUqyBsOIw