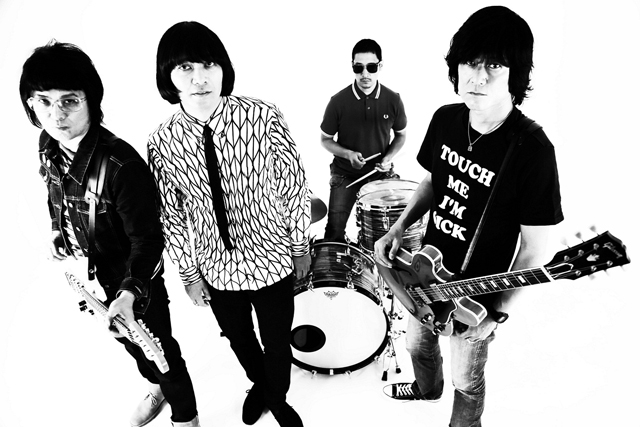 THE COLLECTORS were formed by Hitsashi Kato (Vo) and Kotaro Furuichi(G), inspired by British Beat Rock and British Psyche Rock. They made a major label debut with an album “Boku ha Collector” in November 1987.
In January 1991, they change the rhythm section members, and Makoto Ori(B) and Kosaku Abe (Dr)joined.
Hisashi (Vo) and Kotaro(G)’s pod cast “Ikebukuro Kosaten 24 ji” went viral and chosen as the best 25 pod cast program in 2009, still on air as of today.
In May 2014, the bassist, Makoto left the band and Masayuki “Jeff” Yamamori officially joined.
In April 2016, they had their 30th anniversary solo show at Hibiya Out door Music Hall, which was an instant sold out. On the day of the performance they announced their 30th anniversary if their major debut Nippon Budokan Performance on March 1st 2017.
In Jun, Kosaku (Dr) left the band. On July 20th, they released”Ai aru Sekai 30th Anniversary Session”, the re-recorded version of “Ai Aru Sekai” by many musicians, which was originally released in 1992. On September 7th, they released 30th anniversary CD BOX SET and BEST ALBUM. The promotional tour started in October.
Official Website: http://thecollectors.jp/
Twitter: https://twitter.com/info_collectors
Nippon Columbia: http://columbia.jp/collectors/