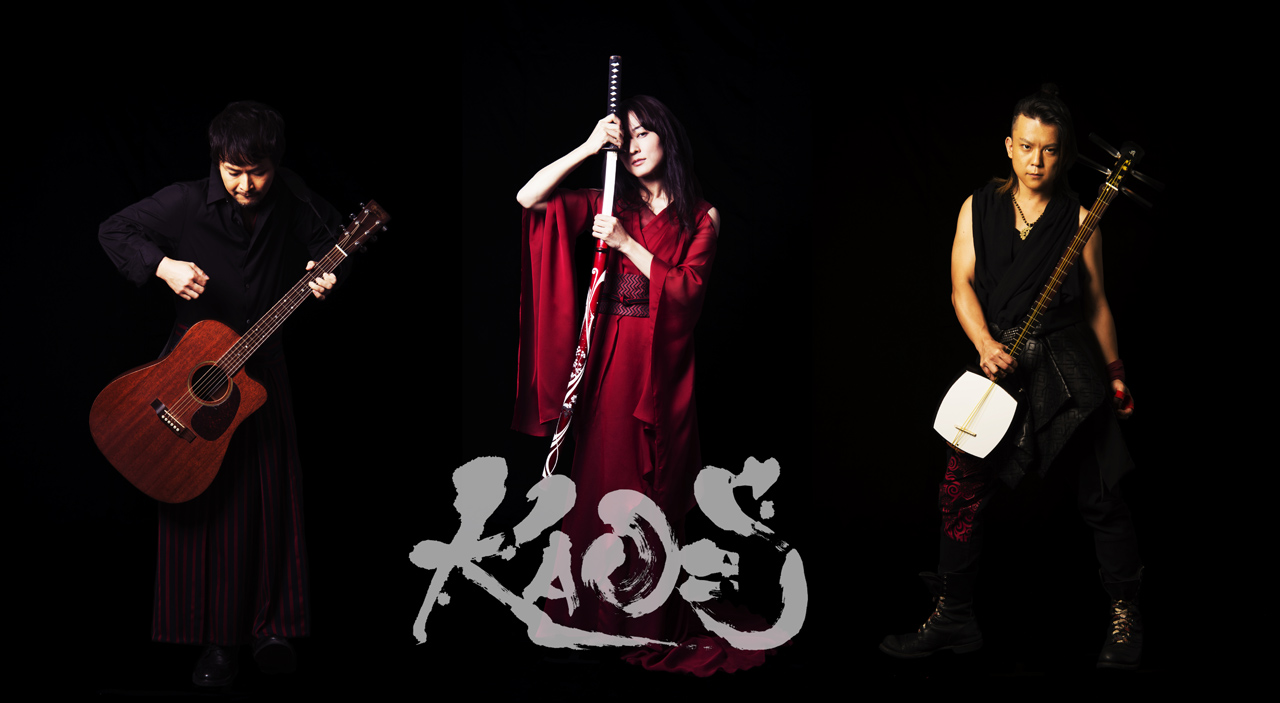 KAO=S was founded in April 2011 by Kaori Kawabuchi (vocal/sword dance), Shuji Yamagiri (acoustic guitar/vocal) and Jack (Tsugaru-Shamisen). Out of the turmoil that followed the 2011 earthquake, the band distilled a new style of Japanese art to bring to the world, which it termed “chaos” or, following the Japanese pronunciation, KAO=S (‘Kah-oss’).Combining elements from Japanese culture with influences from rock and musical theatre, they developed their music and performance into a “Japanism Rock Band”. Their sound is a blend of twin vocals and heavy acoustic guitar, overlaid with traditional Japanese instruments like the three-string Tsugaru shamisen, using a full range of effects. Complemented by Kaori Kawabuchi’s spellbindingly powerful sword dance, KAO=S quickly gained people’s attention.In March 2012, within a year of its formation, KAO=S was invited to perform at SXSW, the world’s largest music showcase in Austin, Texas.
Immediately following an enthusiastic audience reception at SXSW, the band embarked on a nationwide U.S. tour, putting on shows in Chicago, New York, San Francisco, Los Angeles and Las Vergas.
Aside from their music, the members engage in a variety of promotional activities. The manga of KAO=S , written by Shuji Yamagiri, was published worldwide through the Amazon Kindle store, where it debuted at the top of the new manga release chart on January 14, 2013. The French version, published on June 21, reached the no. 2 position. (As far, over 10000DL around the world.)
The music video for their single ‘Ogre Of The Cherry Tree’ spent 7 weeks in the Top 10 of France’s Japanese pop culture cable show Nolife TV, which saw it inducted into the channel’s Hall of Fame. In March 2013, the band performed at SXSW for the second consecutive year, delivering its first solo performance outside Japan and receiving a raucous reception from the audience. A capacity crowd also greeted their first European appearance, at the Nippon Connection film festival in Frankfurt, Germany, in June. In Frankfurt, Kaori gave well-attended
“Samurai workshops” in sword fighting, making a much-appreciated contribution to cultural exchange between Japan and Germany. Afterward, the band traveled to England to perform live in London. In July KAO=S flew to Paris, France, to appear at JAPAN EXPO, Europe’s largest Japanese pop culture convention. Its main stage live performance drew great response and extensive media coverage.
Back home, the band continued to appeal to a wide range of audiences, playing at festivals and conferences, such as the official party for the Japan Aerospace Exploration Agency JAXA.October 2013 saw the launch of the band’s album ‘Monogatari’, which KAO=S celebrated with a solo show at Shibuya WWW, Tokyo, finishing the year on a high note.
KAO=S continues to mix influences from many sources, creating a new style of art and music that it intends to unfold beyond Japan and into the world.
Official Website: http://www.kaos-japan.com/
Facebook: https://www.facebook.com/kaos.japan
YouTube: https://www.youtube.com/channel/UCUEK2HPK48u7qBqq-_Y9yhw