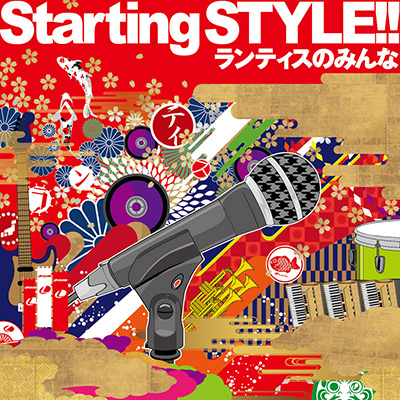 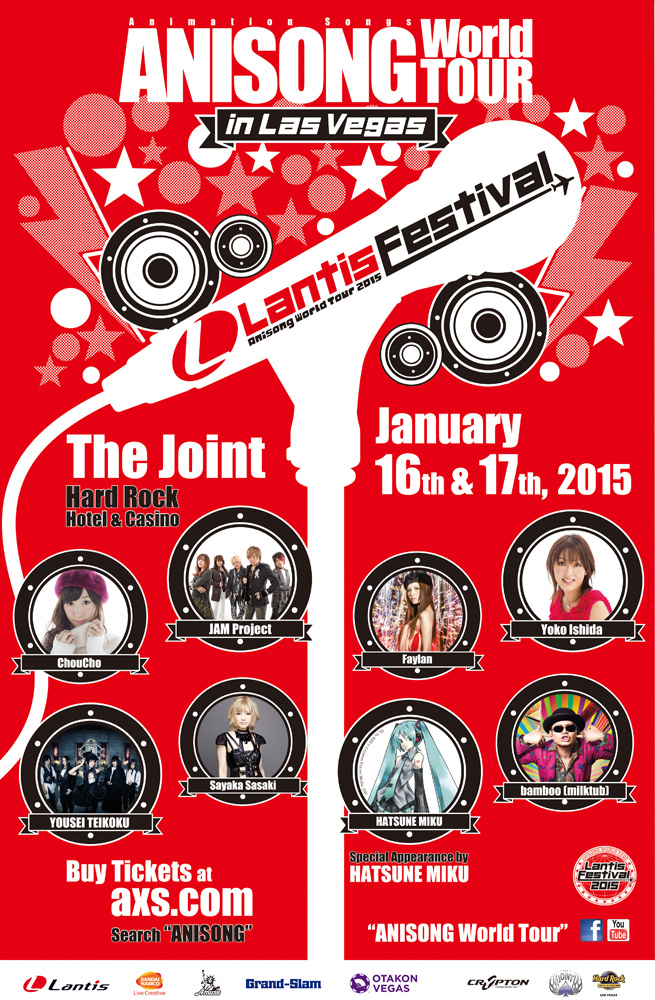 Also released on iTunes this week is JAM Project’s 2013 album THUMB RISE AGAIN, their third studio album which was recorded in L.A. with over 70 musicians contributing to the recording sessions at L.A.’s famous Capitol Records Studios. 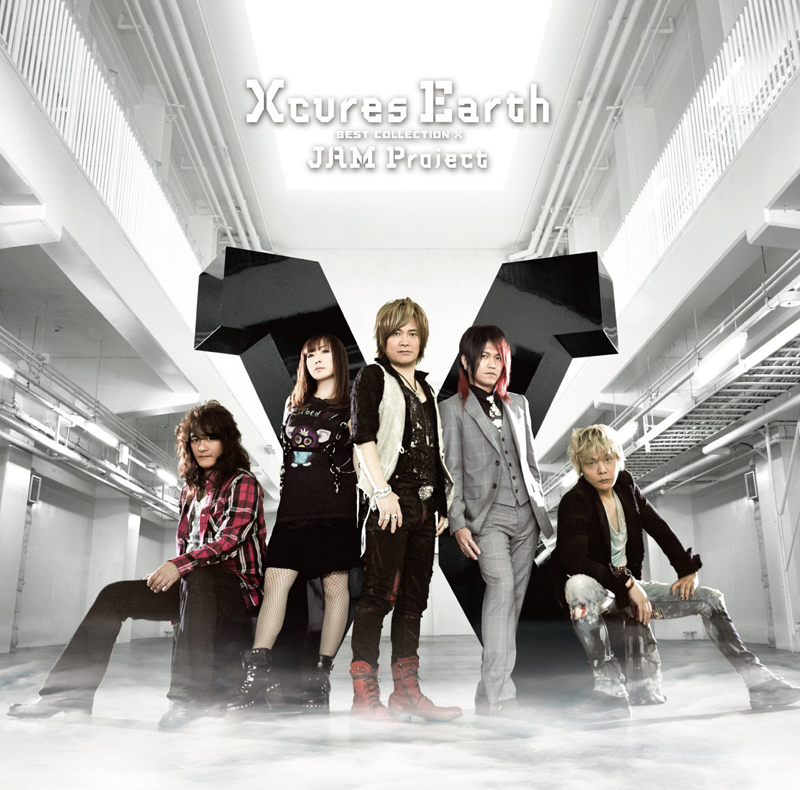 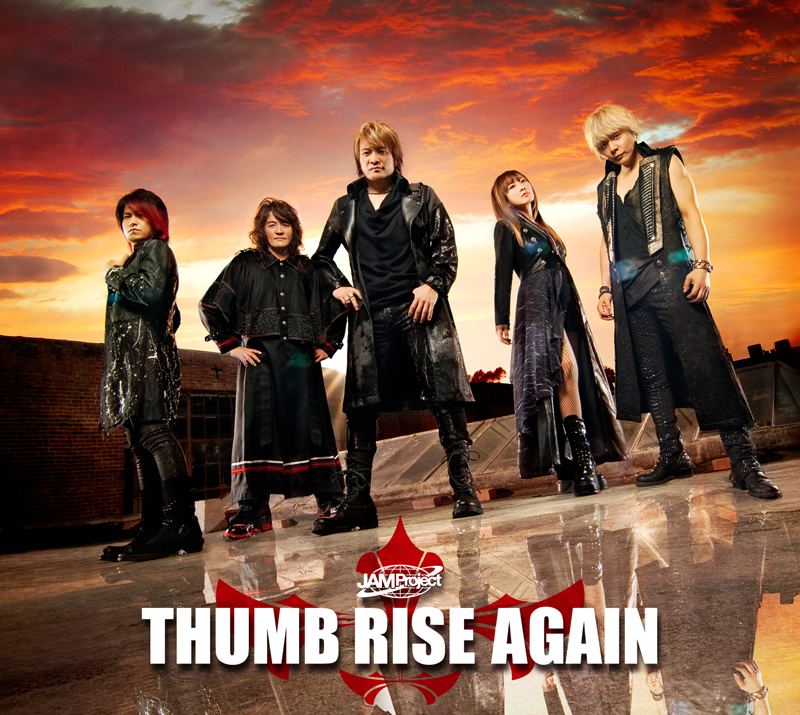 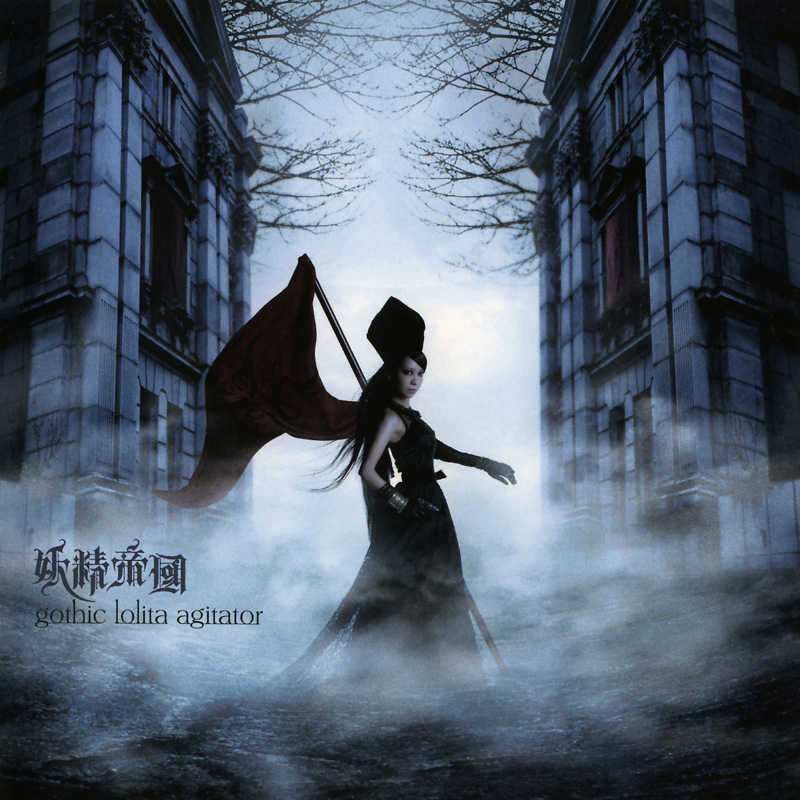 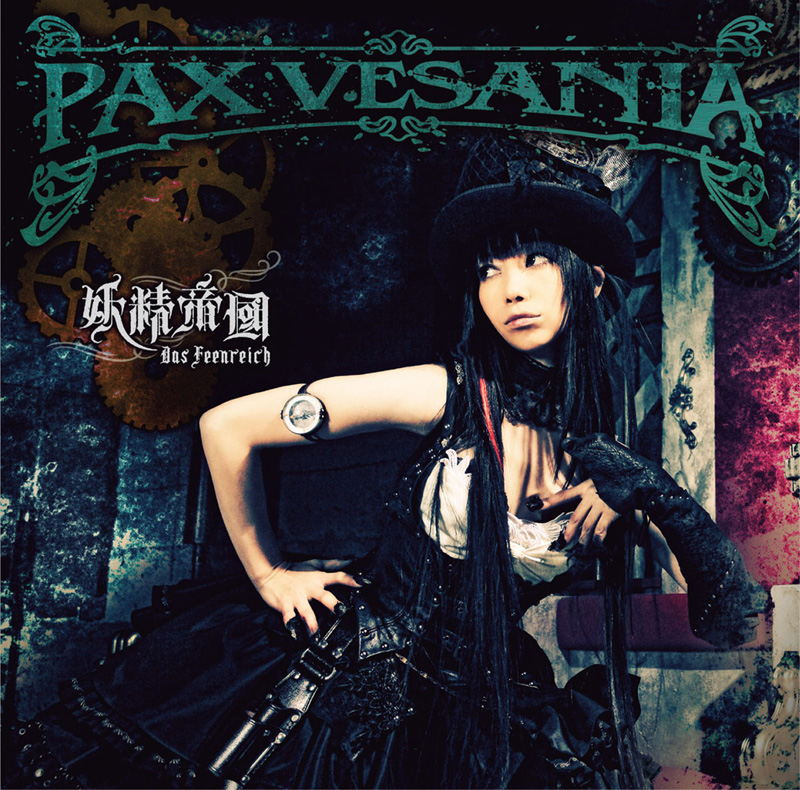 A bonus release by the collective “All Lantis” group titled “Starting Style” is also available.
https://itunes.apple.com/us/artist/all-lantis/id913407602 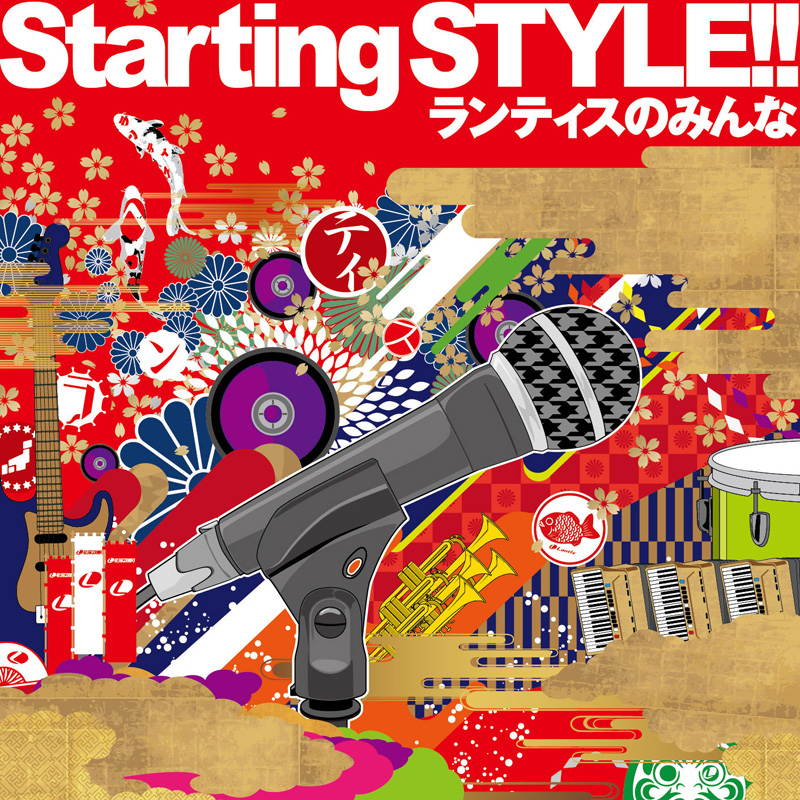 The 2-day Festival at The Joint – Hard Rock Hotel and Casino in Las Vegas is the beginning of the world tour celebration marking the Lantis label’s 15th anniversary, featuring seven powerful music artists, many of them making their American performance debut.

The excitement for the event continues to mount, with Lantis recently announcing solo performances by JAM Project members and premiering a YouTube Channel for the event showcasing the superstar lineup of anime song artists.

Limited VIP tickets are available, which include:
– Early Entry
– VIP Laminate Pass
– Lucky Bag with many exclusive goods from Japan unavailable in the U.S.
– A High-Five session after the show 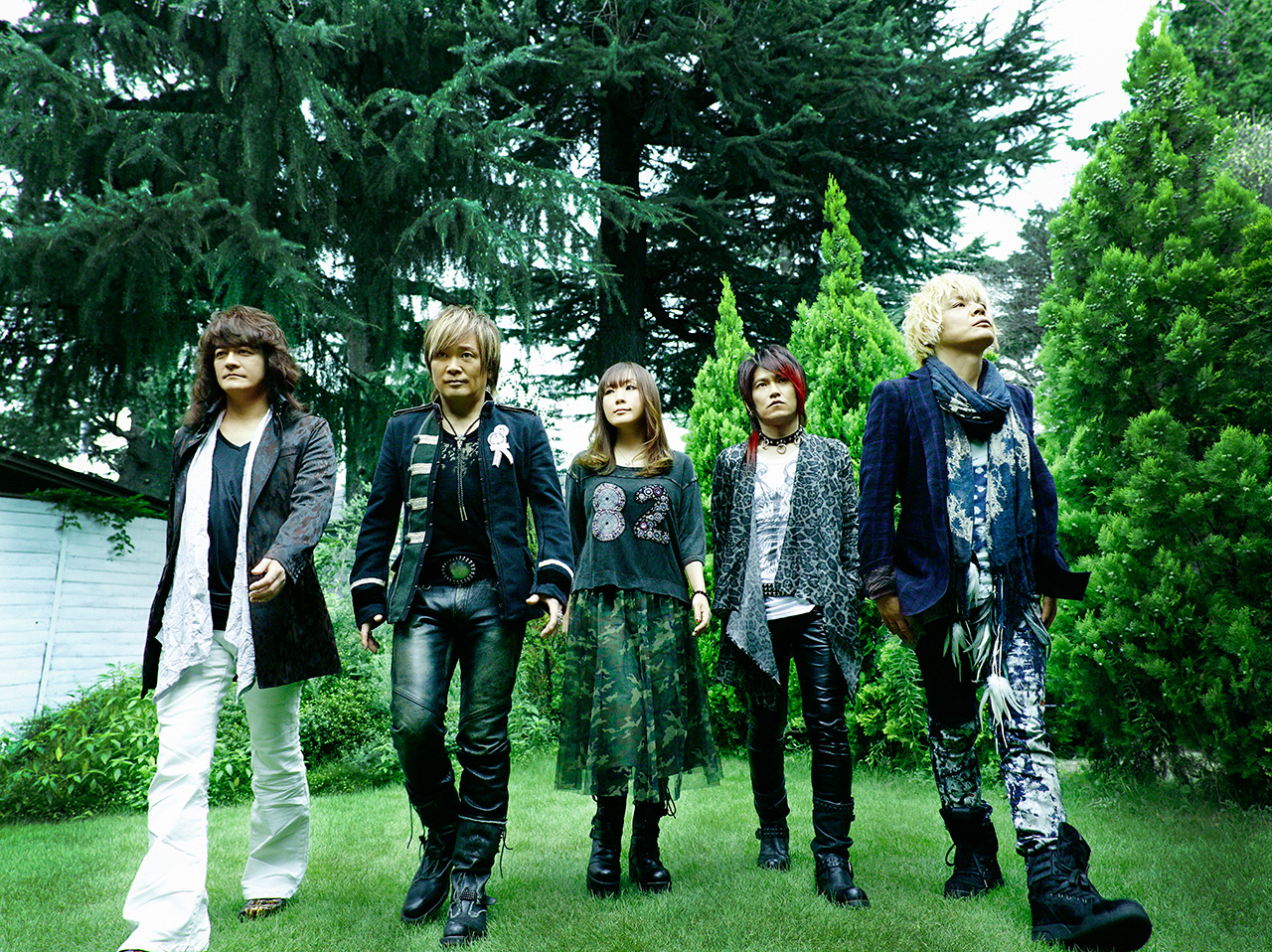 The U.S. show will kick off their 6-city world tour as “the circle of Anisong” that connected all of Japan goes overseas to deliver the heat of Anisong throughout the world.

Lantis Festival at Las Vegas is presented in conjunction with Otakon Vegas.

About Lantis Festival
The 2015 ANISONG World Tour Lantis Festival will bring hit anime songs to 6 cities: Las Vegas, Hong Kong, Singapore, Seoul, Taipei, and one more city to be announced. The ongoing Lantis Festival covered a total of 9 concerts across 4 cities in Japan, delivering successful performances for many thousands of fans. The Tokyo concerts held on the 13th, 14th and 15th of September had an amazing turnout of 28,000 fans in 3 days.

About Lantis Records
Lantis, the premier Japanese record label that represents the largest roster of anime song artists, was established November 26, 1999. To commemorate the 15-year mark of their establishment they held the “Lantis Festival 2014” to bring anime song loving fans in Japan together for a memorable experience.

About The Joint
The Joint at Hard Rock Hotel & Casino Las Vegas is a 4,500-person capacity venue that serves as a sophisticated, intimate and unparalleled entertainment destination. The Joint features seven Luxury Suites, a VIP Studio Level, state-of-the-art sound system, superior video system and a production package tailor-made for artist comfort. It has received numerous accolades including “Best Concert Venue” in Las Vegas Review – Journal’s “Best of Las Vegas” awards 2010 – 2013, “Best Music Venue” in 2012 and 2013 Las Vegas Weekly Awards, “No. 1 Hottest Club in America” award by Billboard Magazine in 2011 and 2013, “Best Live Music Venue in Las Vegas” by MetroWize.com in 2011, “Best New Major Concert Venue” at the 2010 Pollstar Awards, and “Best Live Music Venue” in AOL City’s Best 2010 awards. The Joint delivers unforgettable live music experiences with performances by both legendary and ground-breaking artists including Paul McCartney, The Killers, Bon Jovi, Kenny Chesney, Nine Inch Nails, The Who, Imagine Dragons, Prince, Arcade Fire, Muse, Drake, and No Doubt. The venue created the successful concept of rock ‘n’ roll residencies with Supernatural Santana: A Trip Through the Hits, Mötley Crüe in Sin City, Mötley Crüe invites you to an Intimate Evening in Hell, Guns N’ Roses Appetite for Democracy, Guns N’ Roses – An Evening of Destruction. No Trickery! and Def Leppard VIVA Hysteria! as well as Tiësto In Concert featuring electronic DJ and producer Tiësto. KISS kicked off its nine-show residency, KISS Rocks Vegas, on Wednesday, Nov. 5. Follow The Joint on Facebook, Twitter and Instagram for the latest news and updates. 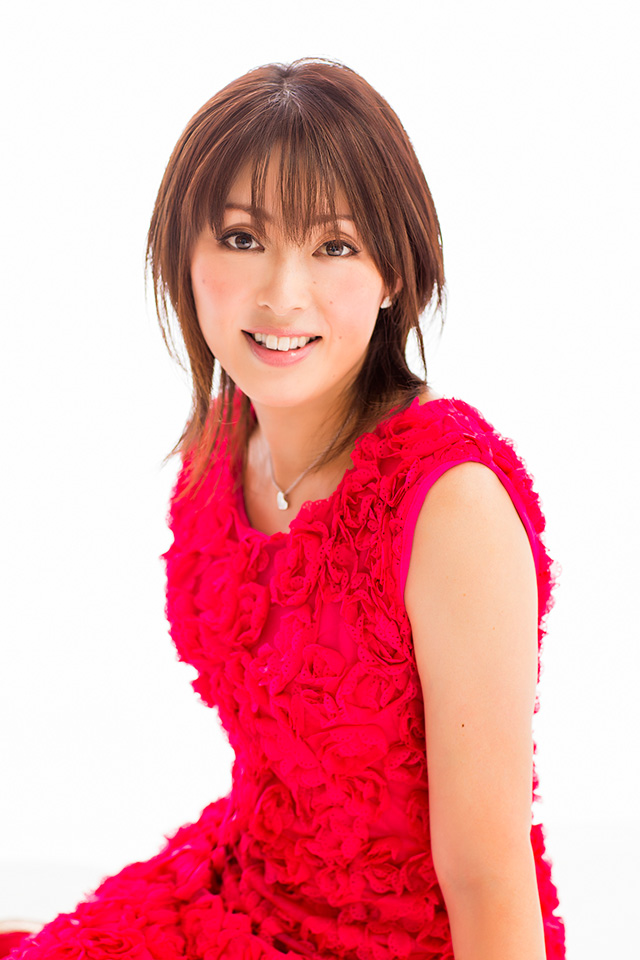 Yoko Ishida
http://www.yokoishida.com/
Yoko Ishida’s music career started after she won a contest to become an “Anisong” singer in 1990. Her debut was in 1993 with the song “Otome no Policy,” which is the ending theme song for Sailor Moon R. In 2003, her 1st album “sweets” was released in the U.S. and she performed a U.S. tour called “AFT (Anime Fusion Tour)” in 13 locations in 2005-2006. She is also known as the singer of the theme songs for the Strike Witches series. She has held concerts in 8 countries and will continue performing as an international “Anisong” singer 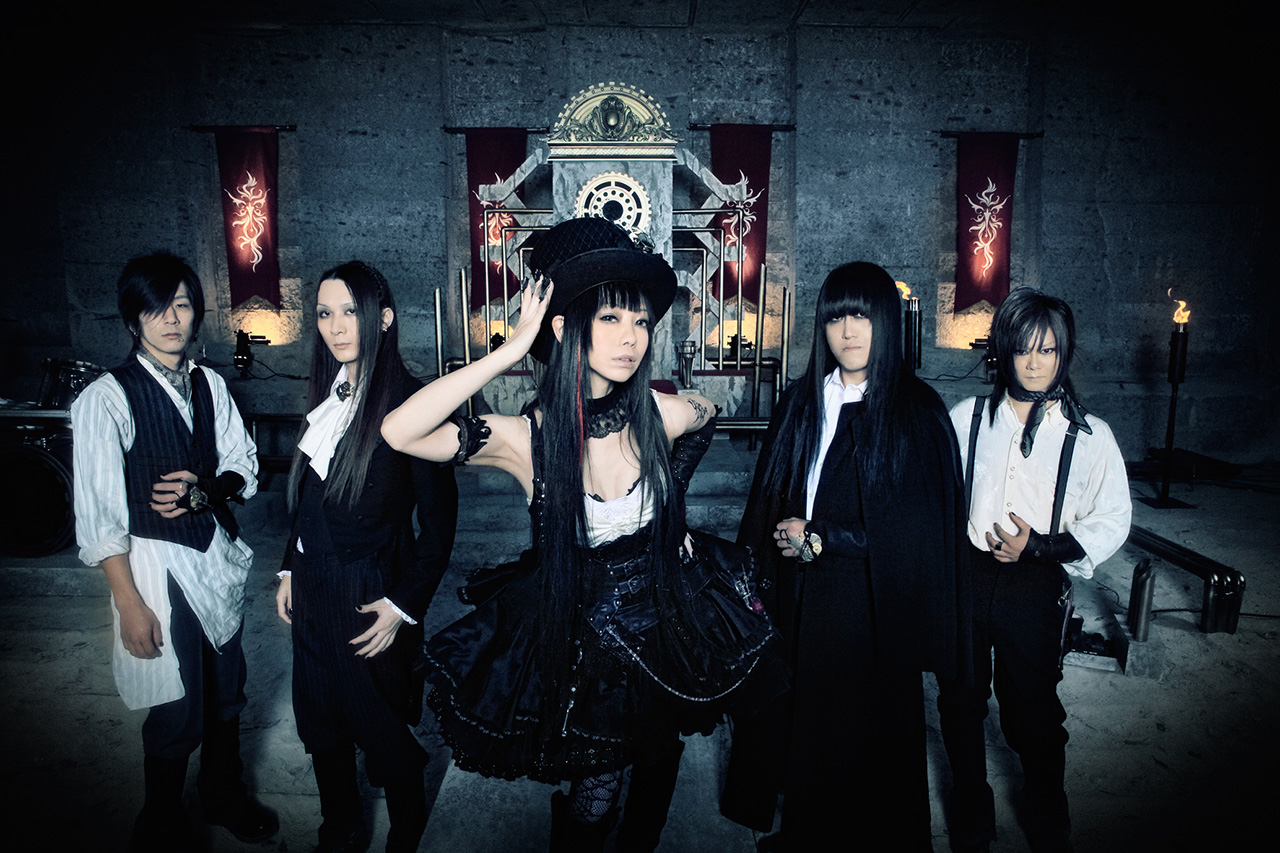 YOUSEI TEIKOKU
http://www.fairithm.com/
YOUSEI TEIKOKU (“Fairy Empire”) is made up of five members: Yui (vocal), Takaha Tachibana (guitar), Nanami (bass), Shiren (lead guitar), and Gight (drums). Their music style is a mix of Techno, Trance, Gothic, Heavy Rock, and Classical. This heavy yet symphonic sound was showcased in the theme songs to Mirai Nikki in 2011. They also performed the ending song for the 2014 anime Tokyo ESP. 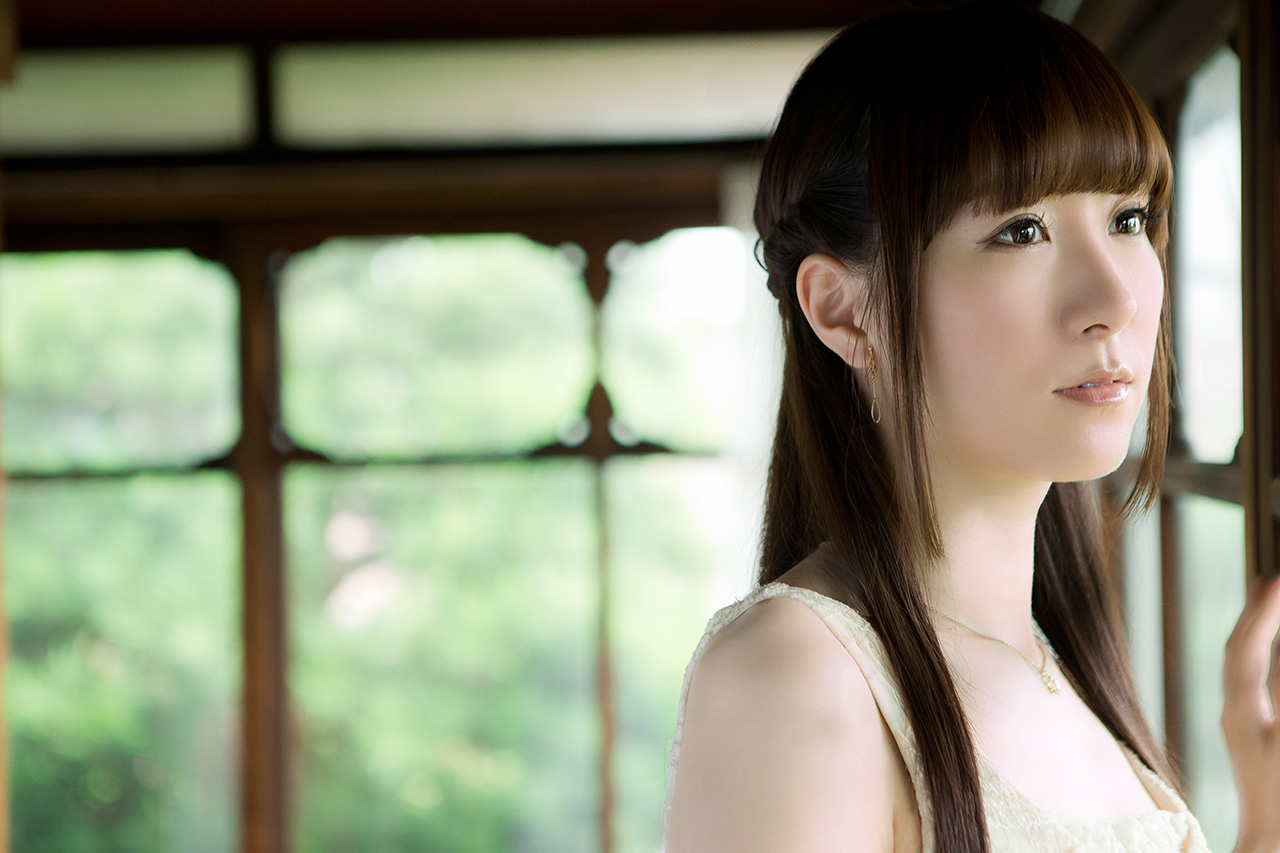 ChouCho
http://iwill-music.co.jp/choucho/
In 2008, ChouCho began posting videos of herself singing on Nico Nico Douga, a popular video sharing website in Japan, which led to her major debut single “Kawaru Mirai” for the 2011 anime Heaven’s Memo Pad. 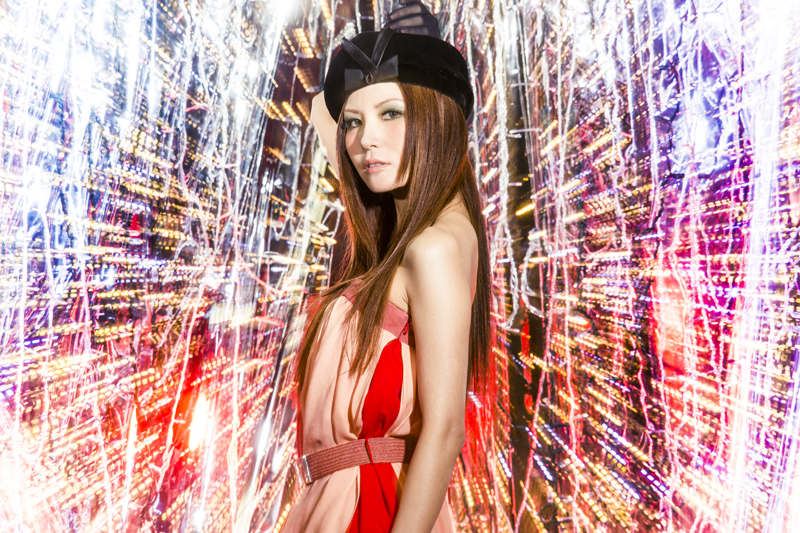 Faylan
http://www.s-inc.jp/faylan/
Faylan debuted with “mind as Judgement,” the opening song of the 2009 anime CANAAN. She has been performing theme songs for several anime and video games, such as the “BLAZBLUE” series in 2013 and many more. 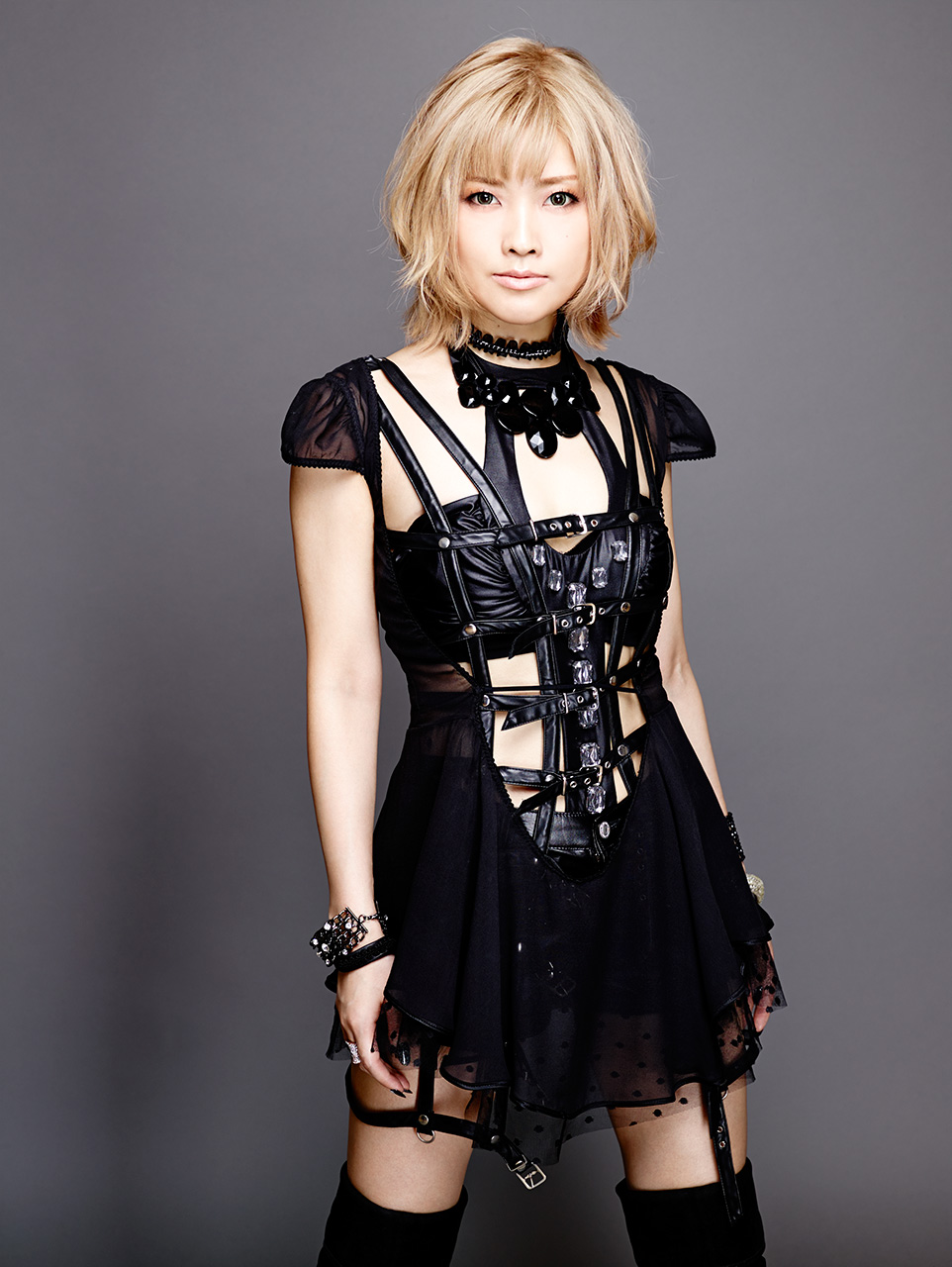 Sayaka Sasaki
http://sasakisayaka.com/
Sayaka is the winner of the “3rd All-Japan Anisong Grand Prix” in 2009, out of 6,570 groups in the competition. She debuted with “Seisai no Ripieno,” the second opening song for the 2009 anime The Book of Bantorra. She continues to sing for many anime and video games. 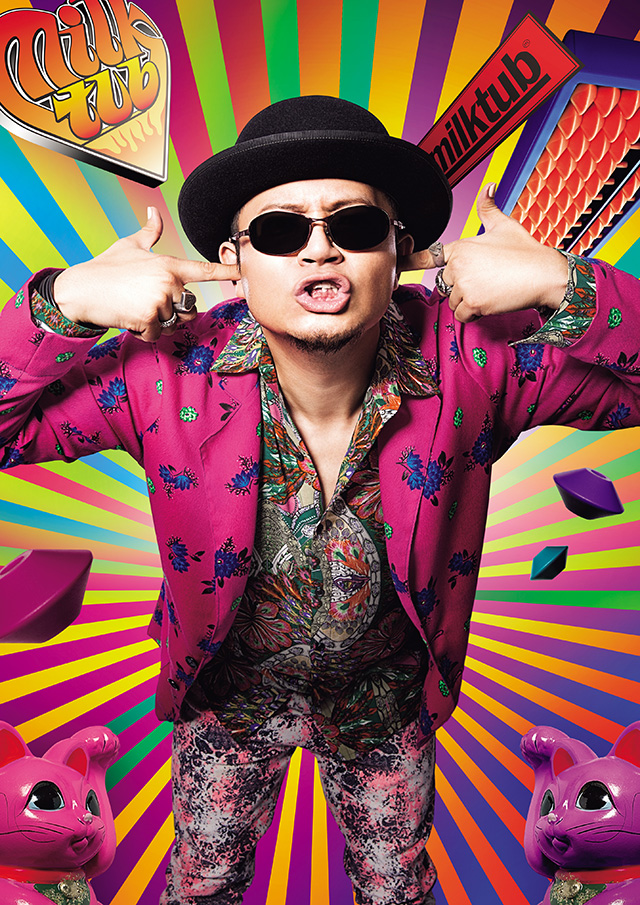 bamboo (from milktub)
http://milktub.com/
milktub is a music unit consisting of bamboo (vocals) and Ichibanboshi Hikaru (guitar) with the slogan of “fast, silly and stylish.” They performed the theme song of the 2013 anime Uchouten Kazoku.