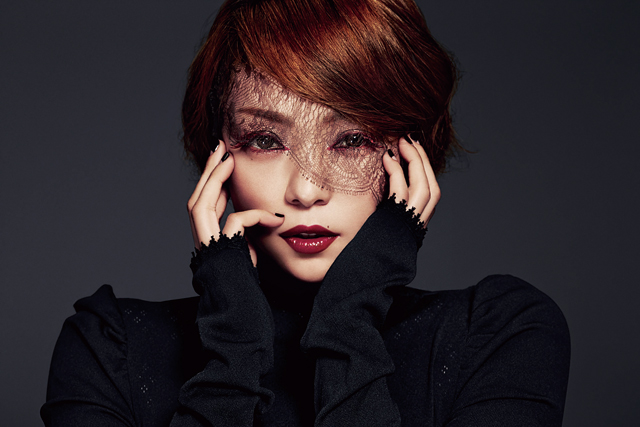 Namie Amuro’s career began in 1992 with the band Super Monkeys. After seven singles were released by this quintet that had been friends since high school, Namie’s talent became so apparent that she made a solo attempt and changed labels from Toshiba EMI to Avex Trax (as did Super Monkeys under the name MAX). Her first single, Body Feels EXIT, quickly sold one million copies.
Thanks to her legendary producer Tetsuya Komuro (globe), she quickly rose as a celebrity and became a fixture in the media. Not only successful in her musical pursuits, the Okinawa-born singer also emerged as an idol for young girls who imitated her looks: long, brown hair with highlights, short skirts and high heels.
After being awarded the title of Best Female Artist in 1996, she announced her pregnancy and marriage to the singer Masaharu Maruyama at the end of 1997. That meant a caesura in her career until her son Haruto was born on May 19, 1998. Not long after that, she made her comeback with the single I Have Never Seen, which immediately hit the top of the charts.
In 1999 she brought a bit more R&B into her music when working with the American producer Dallas Austin. In the same year a tragedy occurred: Her mother was brutally killed by her brother-in-law. However, Namie continued her musical activities, and in July the next year, her single NEVER END was released. She performed the song for various influential people, for example Bill Clinton.
In August 2001, Say the word went on sale, Namie’s first self-written song. One month later she collaborated with the rapper VERBAL (m-flo) on lovin’ it, a song for the victims of September 11th.
In 2002, Namie started integrating herself in the Japanese R&B scene under the pseudonym SUITE CHIC. Collaborating with many popular hip hop and R&B artists, she also released various singles and albums until she ended this project the following year.
With shine more, Namie returned to her solo activities, and at the end of 2003, released her first album after three years, STYLE. From November to the beginning of 2004 she traveled through Asia during her Namie Amuro SO CRAZY tour and held one of the first major jpop artist lives in Seoul, South Korea.
Following the catastrophic tsunami in South Asia, she participated as the only Japanese representative in the MTV Asia Aid and donated a large amount of money to UNICEF.
Her next song Queen of Hip-Pop was predicted to be the new single in April. Instead, Namie released WANT ME, WANT ME, which received criticism for its sexual innuendo, but still managed to reach second place in the charts.
In May she handed over custody of her son Haruto to her ex-husband and concentrated more on her musical career. Between the prizes for the “Best R&B video” and the award for the most impressive performances in Asia, she announced the release of her sixth studio album Queen of Hip-Pop, which was released in July.
For the rest of 2005, Namie spent most of her time on the road, touring throughout Japan. Still, she managed to find some time to release the single White light/Violet sauce, and a DVD that contained video clips.
The following year, she released the single CAN’T SLEEP, CAN’T EAT, I’M SICK, along with a couple of DVDs. 2007 saw the releases of two singles, Baby Don’t Cry and FUNKY TOWN, as well as the full album PLAY. That year she also released a DVD with footage from her NAMIE AMURO BEST TOUR LIVE STYLE 2006 concert tour.
2008 looks like another promising year for the superstar. In February her new live DVD came out, and the next month her single 60s 70s 80s ranked first in the Oricon charts. Already with a decade and a half of experience at making music, Namie is showing no signs of slowing down, and fans should be expecting more lives and releases from this talented singer.
Official Website: http://www.avexnet.or.jp/amuro/index.html
iTunes: http://itunes.apple.com/artist/namie-amuro/id74068261