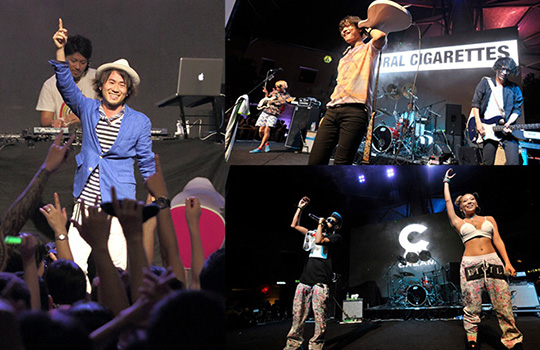 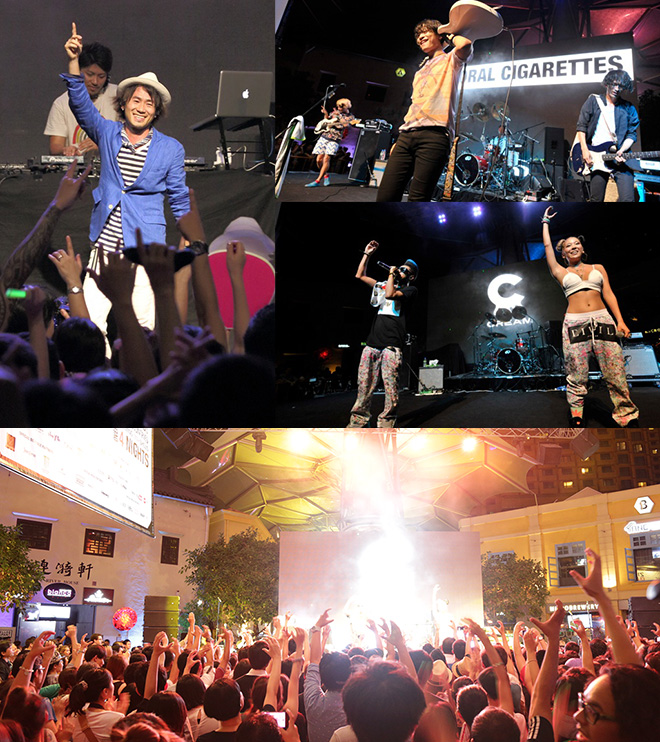 “MUSIC MATTERS”, one of the world’s top three biggest music expos, was held in Singapore from May 21 to 24. “JAPAN NIGHT 2014 in MUSIC MATTERS”, a Japanese music showcase, was held on the night of the 22nd at Clarke Quay, the country’s hottest night spot. Naoto Inti Raymi, THE ORAL CIGARETTES, and CREAM played on this hot Singapore night.

SID, a top Japanese visual-kei band, and Flumpool, who already has a Singaporean fan base, played “J-ROCK MATTERS” in Singapore in 2013. It will be the first time for the three artists for “JAPAN NIGHT 2014 in MUSIC MATTERS” to perform in Singapore. A press conference was held on this night, and Naoto Inti Raymi was asked for a comment. Raymi joked, “I have no (Singaporean) fans now, but I wanna make fans tonight.” The press laughed, but it was heard that the number of coming to the show was still unknown.

There was no need for worry, though. People gathered in droves to see the showcase event. They had been anxiously waiting for this show. Photos of the stage before the show can be seen on the BARKS Facebook page.

“Let’s get ready for the “JAPAN NIGHT” MUSIC MATTERS show on the main stage! Singapore, get wild!!”

The opening speech for “JAPAN NIGHT 2014 in MUSIC MATTERS” was made and CREAM was brought on stage. The duo’s “banquet” style show opened with their Japanese-flavored hip-hop tune, “PARTY CHAKKA-MEN”. They then went into the party tune, “Wonderland”.

CREAM’s YouTube channel, “CREAM VISION”, has surpassed 24,000,000 plays. There are many messages from overseas and Singaporean fans on their YouTube channel. Minami and Staxx T were walking around the city for an outdoor MTV interview when fan’s approached them. Of course these fans went to the show as well. When Minami mentioned their April 30 release, “#nofilter”, somebody from the corner of the crowd yelled “Got it!” The two laughed at the outburst.

“Nobody”, the lead song off of “#nofilter”, made the crowd shout “Nobody!” in unison. CREAM build up a super party atmosphere with “#nofilter” and “Shooting Star”. When the two expressed how they wanted to return to Singapore, the crowd threw up “C-signs” with their right hands. At the press conference earlier in the day, the duo said, “We want to make tonight’s concert a party atmosphere and get wild with everybody.” They succeeded.

NEXT>> THE ORAL CIGAREETES showed their fiery passion with their J-Rock.

2014 J-Rock representatives, THE ORAL CIGARETTES, were next to go on stage. During the changeover, Naoto Inti Raymi, who in the second floor staff space, popped in hyped up the crowd.

THE ORAL CIGARETTES took the grand prize at the 2012 MASH A&R audition contest that was started in 2010. They made their major debut on July 16, 2014. They quickly gained popularity in Japan, but were still virtually unknown in Singapore. There was much anticipation about how the Singapore crowd would react to their performance.

It was their first show in a place they’ve never been to, in front of a crowd that didn’t speak their language. You would think they would nervous, but they appeared on stage full of smiles. It was as if they couldn’t contain their excitement.

“Feel the intense passion of J-rock!” Takuya Yamanaka (vocals & guitar) yelled as he introduced the band. They started with their usual intro of guitar chords. They messed up the timing and crowd laughed. The mistake was charming and the show continued on. Their youth and energy showed as they started their aggressive set with “Mist..”

Masaya Nakanishi (drums) and Akira Akirakani (bass, chorus) laid down a powerful beat. Shigenobu Suzuki (guitar) flung his hair and added distorted guitar. Yamanaka’s shout rung out threw the Singapore night sky. For “N.I.R.A.”, the crowd swayed back and forth with their hands up. Their sound and style overcame the language barrier.

Yamanaka said in broken English, “Satan is coming”, when describing the recent heavy storms in Singapore. Until the previous day, Singapore’s weather was very band and many journalists were stuck on planes. The band then went into “DAIMAOSANJYO” (Satan is coming). There was a call-and-responses in a foreign country (“DAIMAO” and “SANJYO”). Perhaps it was because the air pressure near the earth’s equator is lower, but Akira’s foot stomping was higher than usual. They threw their feelings at the crowd until they ended their set with “Mr. Phantom”.

At the after party, the band said, “It was so fun!!” THE ORAL CIGARETTES realized that their music cross country borders.

Naoto Inti Raymi had the last slot for “JAPAN NIGHT 2014 in MUSIC MATTERS”. Naoto did some light rehearsing just after the press conference and moved over to the “MUSIC MATTERS” convention hall at the Ritz Carlton Millennia Singapore. He played one song for the international press and got a standing ovation. The Clarke Quay main stage area was packed with local fans, fans that can came from Japan, international reporters, and Singaporeans who just happened to be in the area enjoying the nightlife, which made it hard to move.

Naoto Inti Raymi came on stage, raised his right hand, and said, “What’s up Clarke Quay? Let’s have some fun tonight.” Cheers came from all directions. He warmed up the crowd with some beat boxing and scat singing. Then four dancers joined him on stage for the dance tune “Yeah!”. Clarke Quay was already in party mode after CREAM and THE ORAL CIGARETTES. The crowd had their hands up as Naoto brought his “festival vibe” as he always does in Japan.

He sang “IMA NO KIMI WA WASURENAI” and brought a peaceful air to the crowd. He then addressed the Singaporean crowd, known for their multi-culturalism, with “Ni hao, Apa kabar, Namaste, As-salamu alaykum”. The crowd greeted him back. Naoto shouted “GENKI KA?! (How are you?)”, and the crowd responded with , “Yay!” Many people could understand some words in Japanese. To this, Naoto said, “How do you understand Japanese? Japanese is loudest,” and laughed.

Naoto has backpacked to over 40 countries all over the world. He rattled off a list of the countries he’s been to in machinegun fashion, and ended with “…and Singapore!!” The crowd cheered. On a side note, this same speech was give at the “MUSIC MATTERS” convention hall. The speech was simultaneously translated in several languages, but his portion of the speech was way too fast for even the interpreters. Some of the interpreters gave up during the speech (laughs).

Naoto said, “Let’s have fun lah! Dance lah! Go crazy lah!” in his best Singlish (Singaporean English), before going back into his set. Naoto ran and jumped around with his dancers on “OMAKASE Peter Pan” and “Carnival?” His set was hotter than the daytime sun.

Naoto’s last number was “The World is Ours!”, which is also the Coca Cola 2014 FIFA World Cup campaign anthem. Clarke Quay is outdoors, yet has a roof. The sound spread like it was in a stadium and the chorus was spectacular. Naoto then said, “I promise to come back to Singapore. Next time it will be my solo concert, which is my dream. That is my dream, and I want to share my dream with you.” The crowd cheered once again as Naoto left the stage.

And so the Singapore leg of JAPAN NIGHT, the project to enlighten the world to the music of Japan, came to a close. “JAPAN NIGHT” round one will be held at Kokuritsu Kyogijo on May 28 and 29.