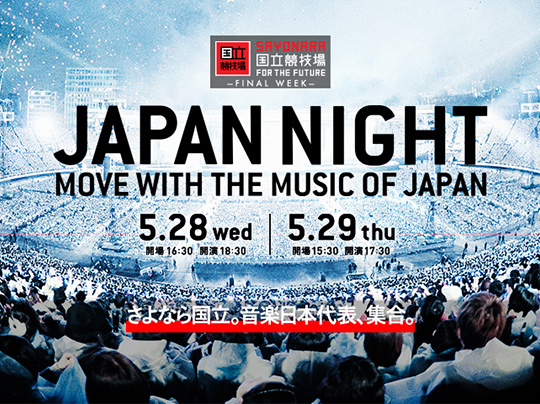 L’Arc-en-Ciel, Perfume, UKASUKA-G (Kazutoshi Sakurai and GAKU-MC), SEKAI NO OWARI and more, will perform at the final music event at National Olympic Stadium!

National Olympic stadium has been the center of Japan’s sports and music events. On May 31st 2014, the stadium will draw a curtain on its long history. National Olympic Stadium’s last music event “JAPAN NIGHT” will be held on May 28th and 29th during the final week.

This event is organized under the idea of “A farewell to National Olympic Stadium and a get together for all music representatives on the final stage”. As the concept represents, Japan’s iconic artists will gather as one for the consecutive two days. On the 28th, the concert is titled as “Yell for JAPAN” featuring Ikimono-gakari, UKASUKA-G (Kazutoshi Sakurai & GAKU-MC), Kaori Kishitani, The Gospellers, Naoto Inti Raymi, FUNKY KATO, YUZU and more. Also for this special day, special band “Yell for Japan” will be formed by Toyomu Tamada on Drums, Seiji Kameda on Bass, Hirokazu Ogura on Guitar, Susumu Nishikawa on Guitar, Makoto Minagawa on Keyboard, Yuta Saito on Keyboard, and Kinbara Chieko Strings, which will be led by the music director Seiji Kameda. Don’t forget there are more names hidden behind the words. . . “and more!”. There will be more legendary names coming up for the event.

The second day is titled “Japan to the World” which features music by SEKAI NO OWARI, Perfume, MAN WITH A MISSION, and L’Arc-en-Ciel. For this day, artists who are popular and are actively performing overseas will make appearance. This event will surely draw the whole world’s attention to National Olympic Stadium.

The first express tickets will be sold at Lawson ticket at 12PM April 18th. It will also be available at Ticket Pia, Lawson Ticket, e-Plus Ticket, and BARKS Ticket at 6PM April 25th. General ticket sale starts at 10 AM May 11th.

There will be an announcement for international ticket sale during this week.

Please check out the official statement for JAPAN NIGHT.

We believe music has the power to move people and help them move forward. We also believe that Japanese popular music has touched numerous people’s hearts in various generations, and it has been and will be deeply rooted in the culture, society and the future of Japan.

Japan has walked through a long hardship and now it’s trying to start over for the big break through of 2020’s Tokyo Olympic.

Japan has overcome the aftermath of the earthquake and has been positively moving forward to create a bright future.

We would like to cheer up Japan through the power of music.

We’d also like the people in the world to know our country and the power that lives in our music.


This hope brought together the newborn Japanese event “JAPAN NIGHT”, and has gathered all the musicians who has been cheering up the country and performing internationally.

The first “JAPAN NIGHT” will be held during the final week of the legendary sport and music event place “National Olympic Stadium” which will end its long history on May 31st 2014.

MOVE WITH THE MUSIC OF JAPAN