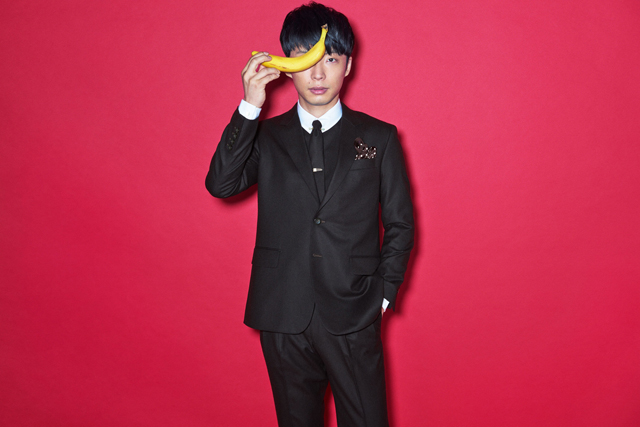 Gen Hoshino is a musician, actor and author.
SAKEROCK are an instrumental band formed in 2000 . The band released the first album “Baka no Uta”, followed by the second “Episode” in 2011. In 2013, the third album “Stranger” charted second on Oricon Weekly Chart. “SUN” released in May 2015 ranked second on Oricon Weekly Single Chart, record high for the band’s career. He also had a solo show for two days in a row in August titled “Hoshino Gen no Hitori Edge in Budokan”, drawing as many as 26000 fans.. Their compositions draw on various styles, from latin Jazz to Japanese folk music, but the band’s sound is immediately recognizable from melody lines played by a slightly off-pitch trombone.
“YELLOW DANCER” released in December charted top on Oricon Weekly Album chart, sold 350 thousand copies, brought him to the stage of “66th annual Kohaku Utagassen” aired on NHK. He also went on to the promotional tour for the album titled “YELLOW VOYAGE”, the first national tour in two years, giving 13 concerts in 11 cities for 10o thousand fans.
As an actor he starred in “Hakoiri Musuko no Koi” in 2013, “Jigokude Naze Warui” directed by Shion Sono, and an anime film “Saint ☆Oniisan”, winning a lot of awards including new actor award in the 37th annual Japan Academy Award.
Also, as an author, he released “Yomigaeru Hentai”, “Hataraku Otoko” “Soshite Seikatsu ha Tsuduku” and “Gen Hoshino /Zatsudanshu1”. The interview with Haruomi Hosono “Chiheisen no Sodan” was printed on 28th of March in 2015. The paperback version of “Hataraku Otoko” was released on September 2nd, making it to top 10 in the book chart. He is a versatile entertainer.
Official Website: http://www.hoshinogen.com/
Twitter: https://twitter.com/gen_senden
Facebook: https://www.facebook.com/hoshinogen2012
YouTube: https://www.youtube.com/c/hoshinogenCh