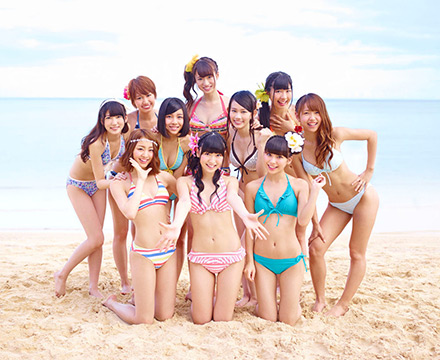 SUPER☆GiRLS Participates in Their First Overseas Event in Hong Kong

SUPER☆GiRLS participated in “Kawaii POP Fest –supported by @JAM-“, which was held in Hong Kong on May 19th, 2013 (Sun). This was the first time for the almost-3-year-old group to perform abroad, let alone Honk Kong.

SUPER☆GiRLS fans from not only Japan, but also from other Asian countries, such as Thailand and Singapore flew in to attend the event; the venue was jammed packed with people from various countries.

As the intro of the first song of the show resonated throughout the place, the members appeared with their new neon-color uniforms. The crowd instantly went berserk and the temperature of the air skyrocketed.

After they performed 3 songs consecutively: “Joshiryoku←Paradise”, “EveryBody JUMP!!”, and “Gambatte Seishun”, and both the group and the crowd were warmed up, the members proceeded to make a greeting in Cantonese. After performing “Rave Together!!!” and “Renai Manifesto”, it was time for introducing the members. The crowd was pleased to see members putting effort to introduce themselves in Cantonese.

After introductions were finished, Ruka Mizote elicited a call & response by saying “We say ‘Uhhhh!’ You say ‘Haaa’”. With the cue they began playing “Tokonatsu High Touch”, their new song scheduled to be released on June 12th (Wed). The last 3 songs on the setlist for the main portion of the show were the aforementioned “Tokonatsu High Touch”, “Puri-puri♥Summer Kiss”, and “Max! Otomegokoro”: all summer songs. As a thick summer feel in the air surrounded the venue, the main part of their show came to an end.

Calls for an encore came up immediately after that, and the members came back on stage. There was a quick change of pace as the members sang “Celebration” with a great amount of emotion. The last song of the show was “Miracle ga Toman-nai!”. The first-ever SUPER☆GiRLS show abroad came to a successful close as a feeling of unity surrounded the place.

After their concerts, the members directly gave out “Music Ribbon” version CDs of the song “Celebration” and silicon bands to the fans who assembled there. The concept of “Music Ribbon” is to “become connected through music”. It seems they were successful in connecting with their foreign fans.

The success they saw at this event must have given them a big boost in their confidence as SUPER☆GiRLS hopes to actively perform outside of the country.

SUPER☆GiRLS will be holding their first solo concert at Nippon Budokan on June 11th (Tue), a day before their 3rd anniversary (June 12th, 2013 (Wed)) since the group was formed. With the concert in Hong Kong and their upcoming show at Nippon Budokan, we could surely expect to see SUPER☆GiRLS extend their activity.