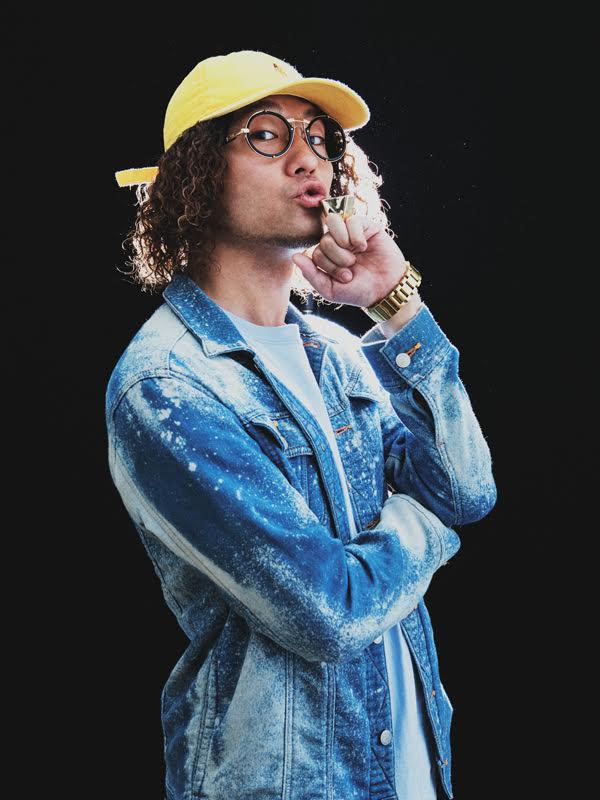 FUNK PLAYA and founder of ALL NUDE INC. Born in Kawaguchi City, Saitama Prefecture. He is also known as “COMBINATE FUTURE”, named by Rammellzee himself. He was labeled “FUNKY” by fans of AFRICA BAMBAATAA’s fans when he jumped onto their stage performed during their show.
In 2007, released his first album “ZEN-LA-ROCK”, which featured big-name artists such as Robochu (Dassen 3), YOU THE ROCK★, Chinza DOPENESS, BRON-K(SDP), NORIKIYO(SDP), Cypress Ueno although he was a newcomer at the time. Furthermore, released his 1st DVD, “ZEN-LA-ROCK/SPACE CONVENTION”, which featured footage of the release party (“SPACE CONVENTION”) for the album. In 2009, released his 2nd album “THE NIGHT OF ART”. In 2010, released the MASH UP MIX version of the 2nd album “MASH-LA-ROCK”. Began his own cap braned “NEMES”.
In 2011, released 2 one-coin CDs, “SUMMER VACATION” and “WINTER GIFT”. He was also featured in one of CRAZY KEN BAND’s songs. In July 2012, released the 3rd album “LA PHARAOH”, and collaborated with the creator, Fantasista Utamaro for a music video. In October, collaborated with SEX Yamaguchi and released the Mix CD “ZENZEN BLEND GWIG GWIG MIXXX”. On top of that, was featured in CRAZY KEN BAND’s Mix CD, “World Standard CRAZY KEN BAND A Tatsuo Sunaga Live Mix” as “Fake Ken Yokoyama”.
He has received much attention for sharing a stage with JACK DANCE DUO・JOY ‘N HAMMER, who were the first Japanese to be featured by internationally renown visual creators YAK FILMS.
Was MC for the “SKIT★LUV” section of “BLACK FILE” by SPACE SHOWER TV. Has appeared as a fashion icon in numerous fashion magazines like Warp, OLLIE, SAMURAI MAGAZINE, and Woofin’. He was also featured as PR character for adidas, TDK Life on Record Boombox, and NIXON, adding much to his resume than just being a rapper.
Official Website: ​http://www.zenlarock.com/
Twitter​: http://twitter.com/ZENLAROCK
Blog: ​http://www.warpweb.jp/pc/zen/
Sound Cloud: http://soundcloud.com/zen-la-rock
Youtube: http://www.youtube.com/user/ZenLaRockDCTV