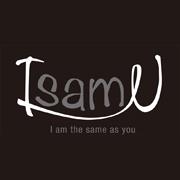 A male singer-songwriter born in 1985. His name was taken from the line, “I am the same as you”, in hope to “close the distance between people and to always be close”. In 2011, provided a song to WEAVER’s Masaharu Sugimoto for his solo EP “facing you” under the name Isamu Kato, which led to his debut. In January 2013, made his long-awaited debut with the album “I am the same as you” from A-Sketch.
Facebook: http://www.facebook.com/IsamU.136.Official