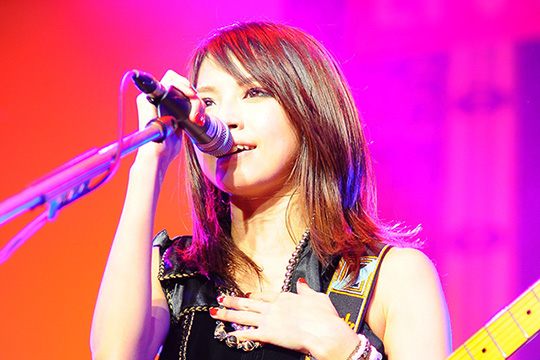 SCANDAL / Performed solo concert for the first time in Malaysia! Announced to have South East Asia Tour next spring! 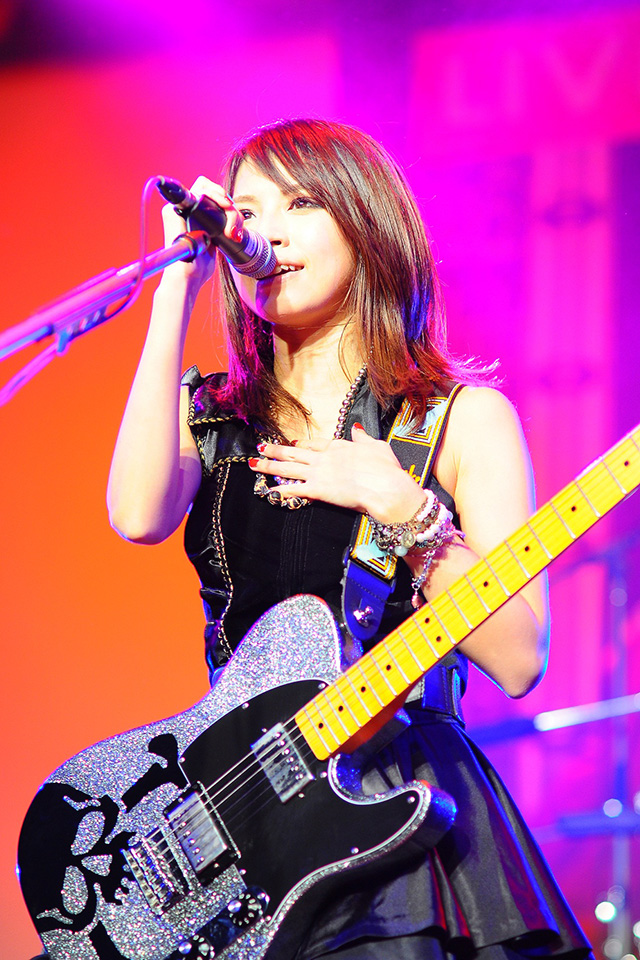 Popular girls band SCANDAL performed solo concert at KL Live, Malaysia, for the first time on Dec.1(Sat). SCANDAL had received a passionate approach from Malaysia and this concert was realized. SCANDAL had tie-ins with lots of popular TV animation as the theme songs and taking advantage of it, they had two-day shows in Singapore last year. They ranked #1 at retail chain store, HMV Singapore’s J-pop/K-pop chart last September. Currently their song “Satisfaction” is used for TVCF of IT company, Windows, which are on-aired in most Asian countries including Malaysia. All these global activities had resulted in a first solo concert in Malaysia.-

Their concert venue, KL Live is located in the city center of Malaysia with a capacity of 1,600 and great musicians such as Loudness, Sum41 and Fatboy Slim had performed in the past. 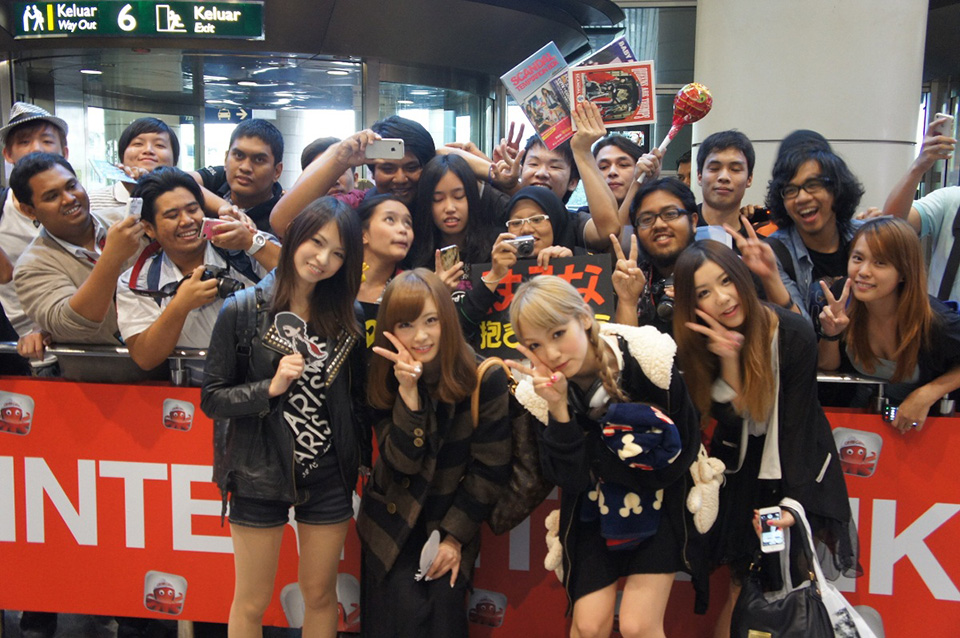 SCANDAL arrived Malaysia on Nov.29th (Thu). When they arrived at the airport, there were so many fans waiting at the arrival hall, who had waited for a long time for the band to visit there.

The first song they performed at the concert was “Rock’n Roll” which is contained in their new album “Queens are trumps- Kirifuda Wa Queen-”, SCANDAL was greeted with massive enthusiasm. Through the concert, fans sang along with the band in Japanese which shows that they had been listening to the latest album. After singing three songs, HARUNA called out “Are you ready for SCANADAL?” to bring a lot of excitement to the event. Every time band members say “Terima kasih (meaning thank you in Malay) during Emcee, there was a big excitement. After the last song, there were local fans who called out in Japanese, “One more time!”. SCANDAL performed “Satisfaction” and fans were charmed to hear this song. Then band’s 90-minute performance fascinated 1,600 fans in Malaysia.

SCANDAL is planning to have South East Asia tour starting March visiting Indonesia, Singapore and Thailand. Their concert ,“SCANDAL BEST★Xmas4” held on Dec.23 will be live-streamed at many movie theaters in Japan and also Hong Kong(MCL Telford )/Taiwan (Vie Show Hsin Yi). They are becoming a focus of worldwide attention! 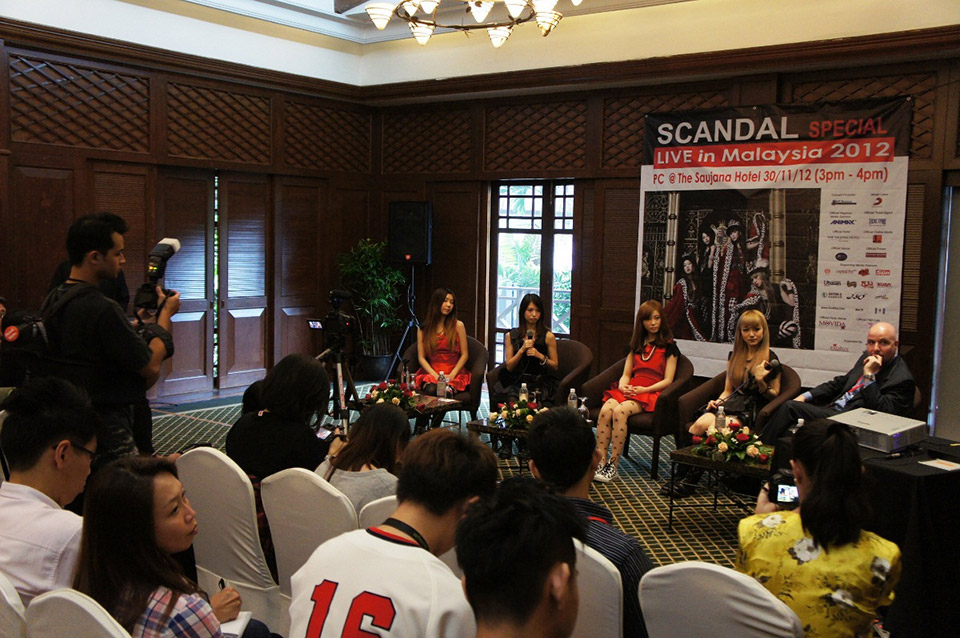 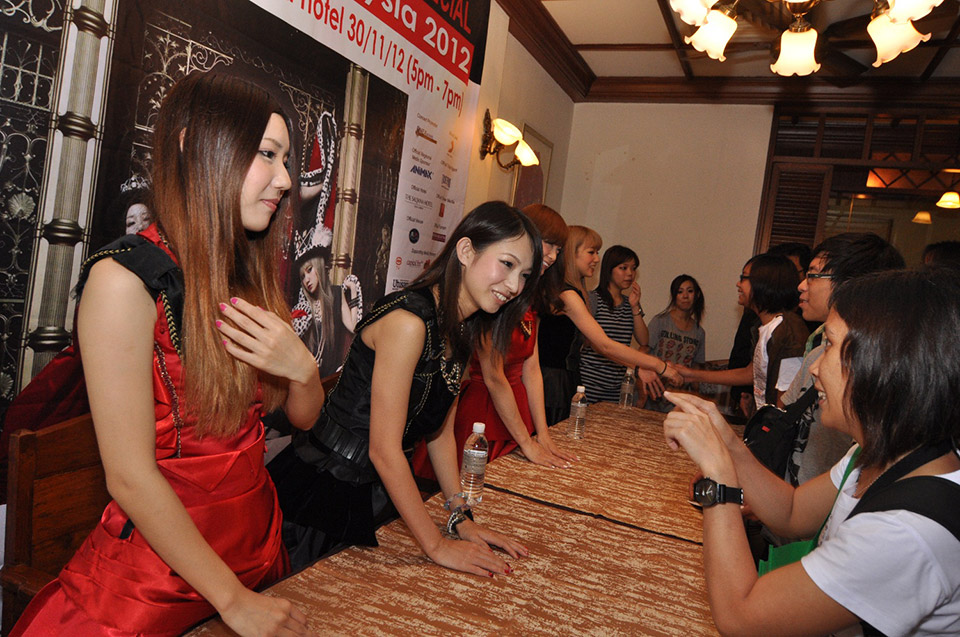 ■SCANDAL BEST★Xmas4
Date:Dec.23(SUN) 2012
Venue: Ebisu the Garden Hall
*Their show will be live streamed at theaters in Hong Kong and Taiwan 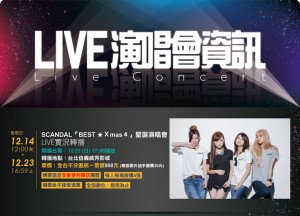 SCANDAL BIOGRAPHY
SCANDAL was formed in August, 2006 with four high school girls who went to the same vocal & dance school in Osaka, Japan. They started performing as SCANDAL with aggressive sounds with pop characters. After it was formed, they often performed on the street of they called Shiroten in Osaka Castle Park. After a while, they started performing at the live house in Kansan area.In March 2008, they were invited to Japanese culture convention Sakura-Con in Seattle, and they went around six cities in the U.S to see over 7,000 fans of them. In July 2008, they generated 10,000 people to Japan Expo in France and 8,000 to Anime Comic Fes in Hong Kong in August. In October 2008, they released “DOLL” as their debut single. “DOLL” was rewarded for Power Play from over 40 FM/AM/CS radio stations in Japan. In June 2009, they released their 3rd single “Shoujo S”, and it was ranked 6th in the first week on Oricon chart, and 5th on Reco-choku Chakuuta Full (Full digital download provider) weekly chart. On October 21st, they released their first album “BEST★SCANDAL” and ranked 5th on Oricon chart in their first week of the release. For the girls band’s album to be awarded within 5th in their first week of the release was the first time in 7 years and a half. In 2009, they were rewarded for New Face Award from Japan Record Award. – New Artist Their 7th single “Shunkan Sentimental” a tie-in song with the smash-hit animation series “FULLMETAL ALCHEMIST”, has again scored high on the charts. #7 on ORICON and #4 on the Reco-choku full (full track download) chart. They released their 2nd album “TEMPTATION BOX” in August 2010, and this was awarded 3rd place on Oricon daily chart. In October, “Scandal nanka Buttobase” was released, and awarded 3rd place on Oricon weekly chart, the highest ranking on Oricon weekly in their history ever. In April 2011, single “HARUKA”was released and it also ranked #3. In August 2011, their 3rd original album “BABY ACTION” was released, followed by “VIDEO ACTION”, 1st video clip collection DVD. They also went on Asia tour, first tour outside Japan, and gathered 2,500 audiences from Taiwan, Hong Kong, and Singapore. In March 28 2012, SCANDAL held the concert in Nippon Budokan, one of the high status venues in Japan.
The band released a single “Taiyou Scandalous” in July 2012, and charted No.2 at Oricon weekly ranking. SCANDAL will be releasing a new single “Pinheel Surfer” and eagerly-awaited 4th album “ Queens are trumps-Kirifuda wa Queen-” on Sept.26.
On March 3 2013, SCANDAL will be performing at Osaka Castle Hall, a venue with 16000 people capacity which they’ve ever dreamed of for a long time. 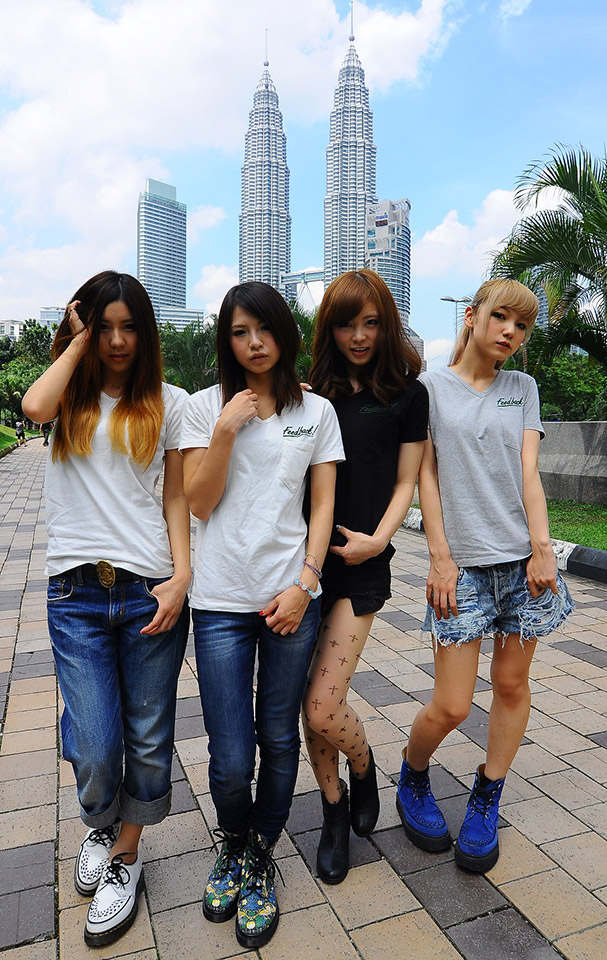